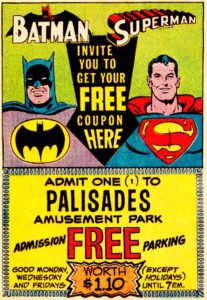 If you were looking for the 7-14 year old demographic for advertising purposes in the 1960’s, all you needed to do was place an ad in a DC comic book.

The items I saw advertised there were bewildering in their numbers. And they are also firmly lodged in my now forty-seven year old memory banks. Today’s piece is about a place that was too magical for me to imagine as a child (and, sadly, a place I never actually visited): Palisades Park in New Jersey.

How great was this place? SUPERMAN HIMSELF endorsed it! He even offered you a free ticket to go visit it for yourself!

There were many advantages to growing up in Small Town America. There was no need to lock the house. The neighbors would keep an eye on things for you. You could walk to school, or anywhere else in town your young legs could take you, with no fear (or even any concept) of the possibility of violent crime. And you knew every single family who lived on your street, and many others in the area as well.

But we had to sit and read about magical places like Palisades Park in New Jersey with no hope of ever going there ourselves.

Palisades Park was born in 1898. Its original incarnation was as a trolley park. Are you as confused by that term as I was? Well, to clarify things, here’s Wikipedia’s definition:

In the United States, trolley parks, which started in the 19th century, were picnic and recreation areas at the ends of streetcar lines, created by the streetcar companies to give people a reason to use their services on weekends. These parks consisted of picnic groves and pavilions, and often held events such as dances, concerts, and fireworks. Many eventually added features such as carousels, ferris wheels, and other rides. However, with the increasing number of automobiles in use, trolley parks gradually declined and some disappeared. Others survived and developed into amusement parks.

And Palisades Park was perhaps the most shining example of the latter in the country, at least in the 1960’s. 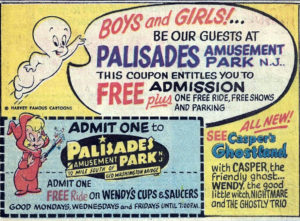 Sitting on a mere 38 acres, this piece of real estate was visited by untold millions of delighted customers from its birth to its closing in 1971. Home to some of the most magnificent roller coasters ever created, these included several versions of the Cyclone (one, being built prior to 1920, was so frightening that it was demolished due to low usage), the Lake Placid Bobsleds, the Jetstar, the Wildcat, and the giant wooden coaster that was pictured in the comic book ads.

Palisades had lots of other stuff going on, too. It was the home of the Little Miss America contest, the largest saltwater pool in the world, and loads of barkers at games designed to separate your quarters from your pocket.

When I was researching this article, I found this site full of the memories of those who visited the wonderful piece of heaven on earth. It’s a bittersweet read, for, alas, the park is no more.

Hugely successful until its closing day, it was a victim of its prime location. It turns out that Palisades Park, like so many of the drive-in movies we grew up with, sat on some primo real estate. When rezoning allowed condominium development, Palisades was sold in 1971 to a company which chopped up the immortal rides, sold them a piece at a time, and bulldozed everything down for multifamily dwellings.

And, BTW, they DON’T advertise in DC comic books.

OK, readers, I want to see comments from you who were fortunate enough to take Superman up on his invitation to pay a visit to Palisades Park.