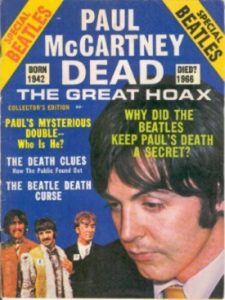 John Lennon made an infamous remark that the Beatles were bigger than Jesus. They weren’t that big, but this rumor which spread across the world like wildfire in the late 60’s showed that they were pretty darned big anyway.

The originator of the Paul Is Dead rumor (big enough that it deserves capitalization) is unknown. It really caught fire in 1969 when a caller identifying himself as Tom spoke to a deejay in Detroit outlining the evidence.

The mysterious caller said that Paul had died of a car crash in 1966, replaced by a similarly talented left-handed bassist who just happened to be a dead ringer (sorry about that) for the original Paul.

Now, we should have taken a massive reality check right there. But hey, urban legends were in their infancy. We still believed that Jerry Mathers was killed in Vietnam, for Pete’s sake. 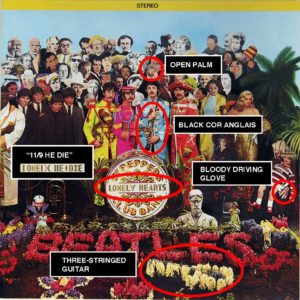 Anyhow, the evidence that the caller presented was on albums that had been released after that fateful date. This included Paul sitting in a trunk (like a coffin) on Yesterday and Today, which was released BEFORE the accident allegedly took place. Oh well, a little foretelling of the future wouldn’t hurt this rolling snowball at all.

Sergeant Pepper is where the evidence began flowing like a waterfall. The band surrounding a grave on the cover, the mournful looking Madame Tussaud’s wax figures, Paul facing the wrong way on the back cover, O.P.D. on his sleeve (Officially Pronounced Dead), the opening words to “Good Morning, Good Morning” (Nothing to do to save his life, call his wife in), etc.etc.

The madness continued with Magical Mystery Tour (I buried Paul at the end of “Strawberry Fields Forever”) and Abbey Road (barefooted Paul marching across the road, English corpses are supposedly buried barefooted). There were literally hundreds of signs of Paul’s demise dug out by hysterical fans.

It was so bad that Life Magazine actually wrote an interview with Paul intended to debunk his death rumors. In the interview, Paul states “It’s all bloody stupid!”

However, the rumors continued to be whispered throughout my grade school as gospel truth. And adults fell for it as well.

The worst fallout from it all was the practice of playing records backwards to listen for hidden messages. This eventually resulted in accusations of Satan worship lyrics cleverly concealed in songs by many rock and roll artists. Oh brother.

I have to admit, though, it is pretty cool to hear what sounds exactly like “Turn me on, dead man” when number nine is played backwards, even on the Woodstock sound check!