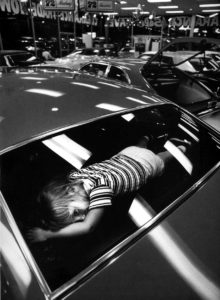 By the time my first child was born in 1986, we had already purchased a baby seat for the car. It had become law here in Arkansas a couple of years earlier that children under the age of two would be strapped in.

But go back about twenty years (from 1986, that is), and the only protection small children had going down the highway was the sheer mass of the vehicles in which they were traveling.

Many of us Boomers fondly recall gas for less than thirty cents a gallon, and consequently drive economical cars today. My ride of choice to get to work (25 miles away) is a 1992 Toyota Tercel which has a new engine and gets 35-40 MPG. Four men at each corner could probably lift it off the ground.

But go back to JFK’s era, and cars were HUGE!

Like I have mentioned in previous columns, dad was on a Plymouth kick in the 60’s and early 70’s. We would go to the same car dealership in Neosho, Missouri every other year, and would once again be treated to new car smell on the drive home.

And the Furys that dad liked all had one thing in common: that sloping rear window that allowed a kid to lay there and soak up the sunshine. Or possibly the starlight, if we were driving back to Miami from Joplin on a Saturday night after dining in Mickey Mantle’s restaurant.

I used to lay back there and periodically roll down into the expansive back seat. It was great fun. And we would be speeding down I-44 at 75 MPH the whole time. No, it wasn’t child neglect. It was life in the 60’s.

I like to go to old car shows and marvel at the sheer size of the vintage vehicles. I sat in a 1950 Pontiac coupe recently. Though the car only had two doors, the back seat was the size of a single bed. No wonder drive-ins were so popular back then! 😉 The glove compartment alone was big enough to hold a twelve-pack of beer.

Times have changed in so many ways. Cars are smaller, more fuel-efficient, and laden with passive and active restraint devices. Babies and toddlers are cocooned in their own little worlds of safety in the back seat. But we Boomers remember when a kid’s place was the rear deck!