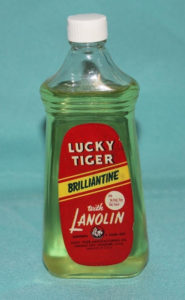 Today, I’m known as the bald guy. In fact, when I incorporated my website design business, it became known as The Bald Guy Enterprises, Inc.

But go back to circa 1968, and when I got spiffied up, my luxuriant blonde hair was coated in a generous slathering of Lucky Tiger Rose hair tonic.

It was called “tonic,” because the oils and other secret ingredients were advertised to be good for the scalp. In fact (though I don’t think the company ever claimed it), it was rumored to prevent baldness!

Trust me. That was not true.

But still, it was a great feeling, slicking your hair back and enjoying that tantalizing, manly scent.

In one of the most blatantly sexist product monikers ever produced, the name Lucky Tiger implied that the user would never again have to worry about a dearth of female companionship. The ads posted removed any subtlety. The message was clear: wear Lucky Tiger and get lucky, tiger!

I’m pleased to see that the product is still being produced in its original form by its original maker. When the Dry Look (the wethead is dead!) took over in the 60’s and 70’s, sales plummeted. But a fierce following kept the fortunate feline on store shelves, where it remains today.

And today, a head full of “greasy kid stuff” is now considered chic. And what could be better for the purpose than genuine Lucky Tiger?