Today’s I Remember JFK is the result of an anonymous idea from one of our readers. Please keep them coming!

One of the familiar sights that we Boomer kids grew up was an image of a sad-eyed child. The child might be accompanied by an equally sad-eyed kitten or puppy.

The paintings had a haunting quality to them. They were simple, almost primitive, but great detail was given those huge, sad eyes.

The paintings were hated by some, loved by many more, and eventually became the largest selling artwork of the 1960’s. That meant that we grew up with them all over the place. Art prints, of course, but also greeting cards, magazine covers, advertisements, and probably even lunch boxes, though I’m only speculating on that last one.

The artist, Margaret Keane, was born in 1927. She describes herself as a sickly, withdrawn child who took comfort in drawing. Eventually, she met and married another artist, Walter Keane, and they ended up in Paris after WWII was over to study the subject. 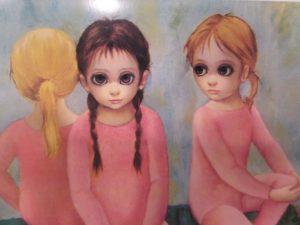 A sight they frequently encountered was that of homeless, destitute children, orphaned by the war.

The sad sight made an impression on Keane, and she began producing paintings of similar sad children. She made the eyes huge, expressive, and often with a single tear.

The art world pooh-poohed them as crass, obvious, and in bad taste. However, the public was intrigued. The paintings began appearing on walls in U.S. art galleries and homes in the 50’s.

Early in the game, Keane made a decision she would later regret. She allowed her husband full control over the management of the business end of things, and even allowed him to take credit for the works.

She would sign a simple “Keane” on each work, making things easy for all concerned. 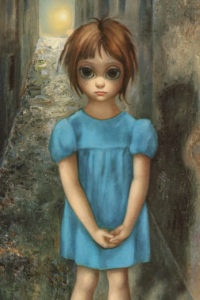 During the 60’s, her husband succeeded in making her artwork a familiar sight. It was hugely popular, much loved (and reviled. Margaret Keane herself said “you either hate it or love it.”), and very lucrative. In 1965, the couple decided to get divorced. That’s when things got ugly.

Margaret wanted control over her art, of course. But Walter claimed that he had painted the sad-eyed children himself. The heavily-publicized lawsuit that followed ended up in Federal Court. It came down to a paint-off before a judge.

Margaret painted a sad-eyed child on command. Walter had a sore shoulder, and declined to try (insert eye roll here). The case was decided in Margaret’s favor.

Back in control of her works, she continued to prolifically crank out the now-more-popular-than-ever paintings. Joan Crawford and Jerry Lewis even commissioned her to paint them in sad-eyed format. But Walter Keane continued to claim that he created all of those pre-divorce paintings. At this point, I’ll let Margaret speak for herself:

One turning point came in 1970 when a newspaper reporter arranged a televised paint-out between me and my former husband, to be held in San Francisco’s Union Square to establish the authorship of the paintings. I was the only one to show up and accept the challenge. Life magazine covered this event in an article that corrected a previous erroneous story that attributed the paintings to my former husband.

That pretty well shut Walter up.

Margaret Keane is still around, but no longer producing sad-eyed paintings. The reason is a happy one. She became a Jehovah’s Witness in 1972, and it had a positive effect on her depression. She still produces paintings, but the sad eyes are now happy.

So here’s to those kitschy sad-eyed kids we saw everywhere in the 60’s and 70’s. Love ’em or hate ’em, you have to admit that they were a memorable part of the world that we grew up in.