On September 9, 1967, a one-time special was aired. It received great ratings, so NBC decided to make it a regular series. It debuted on January 22, 1968, and was a Monday night staple for five years.

It was a perfect example of the right thing at the right time. There was a tremendous amount of tension during those days, with more to come. 1968 would prove to be a year marked by assassination. Vietnam was requiring the lives of more and more young men. The Civil Rights movement was still being met with violent resistance. Mandatory busing of students to force integration was as welcome as a fart in an elevator.

America needed to laugh! And Laugh-In proved to be the ideal solution. It was #1 on the Nielsens for its first two years.

The fact is that the show was brilliance in writing and performance. Behind the scenes, Lorne Michaels and a host of other eventual contributors to Saturday Night Live put together material that was biting, timely, and below the censors’ radar screens.

But the performers were what the public saw, and they saw one of the most talented groups of comedians and comediennes ever gathered in one TV show.

Routines included Arte Johnson’s German soldier peering out from behind the foliage (“Verrrry interesting . . . but shtupid!”); the same performer riding his tricycle in a yellow raincoat, hitting obstacles, and falling down; and playing dirty old man Tyrone, who would be inevitably beaten into submission by Ruth Buzzi’s Gladys Ormphby each time they met.

Henry Gibson would recite a silly poem while holding a huge artificial flower. He also played a coffee-sipping preacher at the cocktail party that aired each episode.

Judy Carne played the sock it to me girl who would be drenched with a bucket of water whenever she was tricked into uttering the famous line. She also played the Judy doll who would clobber any guy who touched her.

Lily Tomlin played snorting Ernestine the operator; Edith Ann, a little girl who sat in a huge chair and signed off with “and that’s the truth” (followed by a rude farting sound from her mouth); and Mrs. Earbore, who would lecture the world on being tasteful, then spread her legs wide apart as she stood up. 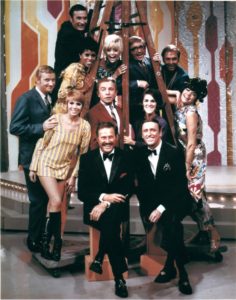 The show featured many others, but I’m, getting tired of writing ;-).

Judy Carne was the first to move on, and as others followed, the show’s popularity began to slip. By 1973, it was finished.

The stars went on to bigger things, in many cases. Goldie Hawn, who acted like a vacuum-head on the show, proved herself to be a savvy, Oscar winning actress who even accomplished that rarest of Hollywood feats: a long-lasting marriage to fellow actor Kurt Russell. Lily Tomlin likewise had a successful film career. Others found success in TV.

The show had repeated skits that were eagerly anticipated by audiences. The Flying Fickle Finger of Fate would be given for some dubious achievement in the news. It was later replaced by the Whoopie Award. It’s a mod, mod world, with Goldie dancing in a bikini with wisecrack statements written all over her, aired each episode. Each show would close with cast members popping open doors in a brightly colored wall and spouting bad jokes while the credits rolled.

We also have several additions to our lingo thanks to Laugh-In. You bet your sweet bippy, sock it to me (Nixon may well have won the 1968 election by spouting the line on Laugh-In. Hubert Humphrey refused to go on the show), look THAT up in your Funk and Wagnall’s, etc.

I could probably write a book about the show. This has barely given it justice, especially in light of those first two incredible seasons, when the original cast was still together.