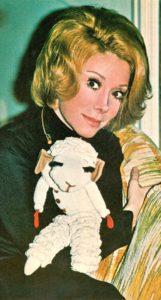 I recall being quite enamored with numerous beautiful ladies on television as a child. There was Annette, my first. Jeannie grabbed my attention, as well as that of every other male in the USA. But I had forgotten how much I was in love with Shari Lewis until I found the featured YouTube video of her in the early 60’s.

Sonia Phyllis Hurwitz was born on January 17, 1933. She adopted the stage name Shari Lewis when she broke into show business as a puppeteer and ventriloquist. In 1952, she won first prize on Arthur Godfrey’s Talent Scouts.

In 1957, New York kids would wake up to a show called Hi Mom. In that year, on that show, Shari, now a fixture in local children’s television, debuted a simple sock puppet named Lamb Chop. The diminutive ewe would accompany Lewis into stardom.

It wasn’t long before Lamb Chop made a national TV appearance on Captain Kangaroo. She (and her beautiful creator) were an instant sensation.

(Lamb Chop is a) 6-year-old girl, very intuitive and very feisty, a combination of obstinacy and vulnerability….you know how they say fools rush in where wise men fear to go? Well, Lamb Chop would rush in, then scream for help! 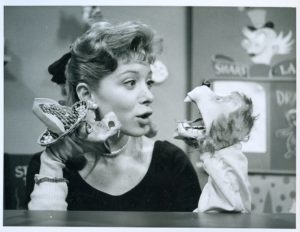 Indeed, while looking quite cute, Lamb Chop would frequently let loose with wise cracks that would make stand-up comedians proud. The humor was frequently aimed at adults, making Lamb Chop a hit for all ages.

Shari and friends (including her other puppet creations) got their own show in 1960. The Shari Lewis Show rode high for three years, then was unceremoniously canceled by CBS. Animated kid shows were much cheaper to produce than live-action varieties, thus ended a truly great series.

But Shari and her smart-aleck sheep weren’t done, not by any means. They appeared in video shorts, in dozens of books, as guests on numerous TV shows, and on their own UK series. When we started buying videotapes for our kids in the 80’s, Lamb Chop was a huge seller as Boomer parents recalled how much they loved her. Thus, many too young to be Boomers are fans.

But in 1998, this beautiful, sprightly, talented entertainer was tragically taken from us at the too-young age of 65 by uterine cancer.

Watching films of Shari performing with her simple puppets fills you with astonishment at her talent. She eagerly follows along with the conversation between the critters, looking as fascinated by the goings-on as we are. You soon forget that they aren’t real.

No wonder we Boomer kids went nuts over Shari, Lamb Chop and her friends.