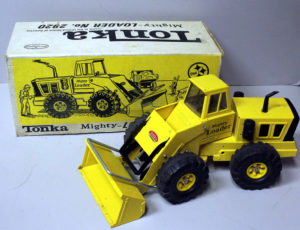 Many of us Boomer kids had toys that were only obtainable locally, or perhaps handmade ones that were absolutely unique. And some toys appeared too late for our more senior members to enjoy. But I would be willing to venture a guess that any American Boomer boy in the United States either owned Tonka toys, or at least played with them at friends’ homes.

It is difficult to imagine a toy that was more appealing to its intended customers. Kids love cars, trucks, and construction equipment. And they particularly love durable, big, colorful models of them. So to no one’s surprise, Tonka toys are one of the biggest sellers in history.

And they showed up just in time to entrance the Baby Boomer generation. Our back yards would never be the same. Somewhere, we created a construction area where we could grade roads, haul dirt, and drive our trucks.

When I first launched I Remember JFK, I wrote a short article about how much I adored the Tonka bulldozer. But, like all of my buddies, I loved all of them.

Tonka got its start on September 19th, 1946 when Mound Metalcraft was created in Mound, Minnesota. Their intent was to produce garden tools. However, the building that they obtained had a former inhabitant who had tried and failed to make miniature metal toy vehicles. The partners thought such a sideline might produce a little extra income, so they reworked the tooling a bit and started making Tonka toys, from a Dakota-Sioux word meaning “big.” They started selling them a year after founding the company.

That first year, their initial offerings, a steam shovel and a crane, sold 37,000 units.

With sales like that, who needs to be making hoes and shovels? So the company began ramping up Tonka production, creating many new designs. In 1955, Mound Metalcraft changed their name to Tonka Toys Inc.

Parents, particularly those with more than one child, loved Tonka toys as well. They were made to last forever. That meant you could buy one for your firstborn, and it could be passed down from sibling to sibling. There were certainly cheaper plastic alternatives to Tonkas, but there was no better long-term investment.

Tonkas taught us a lot. For one, they showed us that someday we would be agonizing about that first scratch on our new car.

Many of us were given Tonkas obtained at yard sales, or perhaps we were the younger brothers who received hand-me-downs. But some of us were fortunate enough to get mint models straight from the store. When we opened the box, we were greeted by a metal machine with gleaming paint, in many cases yellow. But sooner or later, it would get its first ding. And that would hurt.

But soon we would forget about it, and our road grader or tow truck would obtain in short order many more scratches, dings, and chinks. They were badges of honor.

A shady area under a big tree would frequently have sparse grass coverage, and would be summarily transformed into the aforementioned construction area. I spent many, many happy summer hours digging under our big elm tree. I’m pretty sure my older brothers had their own projects there as well.

What was cool about Tonkas is that they were scaled the same, so if you had, say, a car hauling rig, you could load it with your other Tonkas. And as other children got older, your collection was continually being increased as you got them handed down to you from other relatives or friends of your parents.

Many of us still have a Tonka or two around. I held onto a semi-truck that my boy played with, intending to restore it someday. But even if I don’t, I’ll put in a yard sale so some lucky kid will have it brought home by a parent who knows a good investment when they see it.