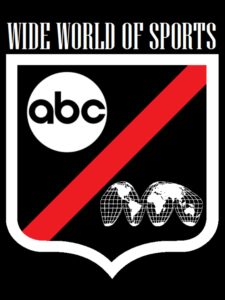 Roone Arledge was a man to whom any stockholder of ABC should raise a glass on a regular basis. He was single-handedly responsible for taking the perennially third-rated latecomer network and turning it into the sports powerhouse that it was during the time that we Boomer kids were growing up in the 60’s and 70’s.

Besides Monday Night Football, which is still riding high, Arledge was also responsible for a show which debuted in 1961 whose weekly 90-minute Saturday afternoon run is burned permanently into my memory banks, and probably in yours as well.

“Spanning the globe to bring you the constant variety of sport… the thrill of victory… and the agony of defeat… the human drama of athletic competition… This is ABC’s Wide World of Sports!”

With those words, I would be parked in front of the television set for the next hour and a half, watching competitions between a bewildering variety of athletes, including figure skaters, drag racers, boxers, gymnasts, and jumping frogs.

At presstime, the world was mourning the recent death of longtime WWoS host Jim McKay. It was McKay who brought the drama to those opening words, which, incidentally, were written by writer/actor Stanley Ralph Ross, who is also known for penning numerous episodes of Batman, The Monkees, and All in the Family.

McKay hosted the show for a dizzying 25 years. Yes, there were others that followed, but McKay is the only one that anybody old enough to remember JFK gives a hoot about.

What I find amazing is that I would sit and watch entranced as sports that were quite obscure, or even competitions that weren’t sports at all, were shown to a kid who would normally not have time for anything but football or baseball.

Somehow, ABC’s Wide World of Sports made a badminton match sound like the most exciting competition in the world. 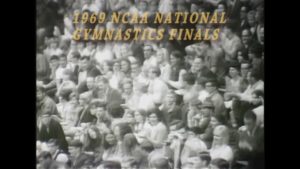 They also introduced the world to Mexican cliff divers. Rumor has it that ABC payed them a dollar a jump in the early days. It was a lot of bang for the buck. They would take a 150-foot plunge into the ocean, and the world that was tuned in on Saturday afternoon was amazed. It became one of the show’s most popular events, and, one presumes, the divers ended up getting a nice raise.

Other offbeat competitions included firemen trying to outdo each other in spraying a big barrel on a wire in a sort of reverse tug-of-war. The Calaveras County frog jump contest was covered quite regularly. And I’m pretty sure that I can recall Sottish caber-tossing.

But better-known sports were also featured, and made for many unforgettable moments. For example, I am proud to say that I can remember the unlucky Slovene ski jumper (whose name was Vinko Bogataj) taking his tumble on a 1970 episode of WWoS. When it was later integrated into the show’s intro, I had to agree with ABC that the moment pretty well summed up the agony of defeat. Bogataj suffered only a concussion, amazingly enough.

Bowling was so popular that ABC began a 35-year tradition of featuring professional competitions hosted by Chris Schenkel in that same year of 1961.

And of course, Muhammad Ali’s career might not have been the same without the Howard Cosell-announced matches that were part of the Wide World of Sports tradition.

Cable TV doomed the concept of a ninety-minute broadcast network show about every sort of sport under the sun. You still hear the title ABC’s Wide World of Sports applied to a Saturday afternoon special from time to time, but the dominating force that was once the show is long gone.

But as long as there is a single Boomer left on the planet, that unforgettable opening sequence will continue to exist in memory.