At presstime, Michael Phelps has just picked up gold medal number eight in the 2008 Summer Olympics. This makes the nostalgic among us (like you and me, for instance) harken back to when the mark of seven was set back in 1972.

The world was a different place back then. The war in Vietnam was still going on. However, Nixon was running for re-election promising “peace with honor.” Gasoline was still dirt cheap, but that was about to change. The previous Olympiad had been notable for the Black Power salute on the medals stand by Tommie Smith and John Carlos, as well as a record that was shocking in its destruction of the previous one, the long jump mark set by Bob Beamon.

What would the 1972 games hold? The event organizers were optimistic that there was less tension in the air than four years previously. The war looked to be winding down. Civil rights were at an all-time high, and getting better every day. Perhaps the 1972 Olympiad would be known as a return to the idealistic standard of sports without politics, or controversy.

The 1972 Olympics would certainly have its triumphant moments. For instance, USA swimmer Mark Spitz would win seven gold medals, a feat never before accomplished, and one which would take 36 years to surpass.

Incidentally, this would be followed by Spitz practically disappearing from public consciousness afterwards. A triumphant and handsome athlete who can’t cash in? Methinks he should have shopped around for a better agent. Contrast his case with that of Mary Lou Retton, who is still a familiar face in ads 24 years after winning gold.

Another name that jumped into the headlines for positive reasons was that of Olga Korbut. The seventeen-year-old touched a sympathetic nerve with viewers. A member of the cold-hearted, strictly-business Soviet bloc, she nonetheless displayed real tears after making mistakes, something we weren’t used to seeing. That made us cheer hard when she did well, and well she did well indeed. She won three golds and a silver, and would have won more if not for her frequent human failings, another trait that we were not used to seeing among the communist ice princesses.

By the way, Olga, now an American citizen, has had her ups and downs since then, but she appears to be on a nice upswing now, teaching gymnastics at Scottsdale, Arizona.

Controversy would also rear its head at Munich, though, in a minor way (it certainly didn’t seem that way at the time) as well as a tragic act of terrorism.

The US men’s basketball team had never lost in men’s basketball in Olympic play, winning seven gold medals dating back to 1936. But psychopathic timekeeping had a different outcome in mind this time. The end of the game was delayed again and again until Russia finally won. The shocked Americans appealed, and guess what? The two judges from democratic nations voted for them, the three from communist regimes voted against. The Russians won gold, the US refused silver. Even having a present-day democratic Russian government, I.E. winning the REALLY BIG competition, has not stifled the resentment felt all these years later among US Olympic basketball fans (and 1972 team members). 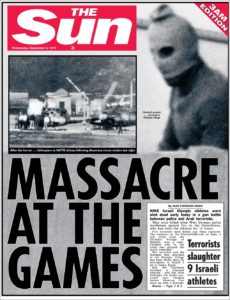 But this was mere sports and political prejudice. Sadly, genuine tragedy would also mar the 1972 games.

Palestinian terrorists kidnapped eleven members of the Israeli team, both athletes and coaches. They held them hostage, demanding the release of 234 prisoners held in Israeli prisons. Negotiations took place, and a plan to overcome the kidnappers and rescue the hostages was implemented. However, German police posing as flight crew on an airliner that was to transport the criminals to a NATO airbase backed down at the last minute and refused to take part.

Snipers attempted to take out the kidnappers, but failed to get them all. One of them tossed a hand grenade into a helicopter that held the Israeli hostages and all were instantly killed.

Thus, the Olympics were also marred by much mourning and anger over the botched rescue attempt, which continues to draw accusations of governmental conspiracy all these years later. Mark Spitz, a Jew, left Munich before the closing ceremony for his own protection.

What will the Olympiad of 2008 be remembered for? It’s too early to tell. But it’s safe to say that Michael Phelps will be looking to greatly surpass the post-Olympic buzz that Mark Spitz managed to harvest.