Today’s I Remember JFK memory is one you’re no doubt familiar with if you grew up in the 60’s, even if, like me, you didn’t have a clue who they were or what they did. That’s because you heard their moniker, the Chicago Seven, every night on the news.

Indeed, I grew up with the name of the group on trial as familiar with me as terms like Vietnam, Gemini, Martin Luther King, and other subjects of newscasts. But the Chicago Seven were baffling to a kid, because it just wasn’t clear why they were in trouble.

They were charged with, among other things, conspiracy. That was rather frightening, because conspiring was supposed to be an okay thing to do. After all, didn’t the song Walking in a Winter Wonderland say “Later on, we’ll conspire, as we dream by the fire?” Evidently, if we did, we would be subject to arrest.

It was all very confusing to a kid. I was confused enough, because I would overhear my mom say things to my older brother like if he dropped out of school, he would be sent to Vietnam and would be shot. Now THAT was an incentive to keep the grade average up!

The Chicago Seven were on trial because of riots at the 1968 Democratic Convention. They were charged with inciting the riots, and other offenses related to stirring the pot which caused violent demonstrations. The eight, later pared down to seven, were extreme radicals. They were Abbie Hoffman, Jerry Rubin, David Dellinger, Tom Hayden, Rennie Davis, John Froines, and Lee Weiner. Black Panther Bobby Seale was removed from the trial by a whopping four-year sentence for contempt of court. 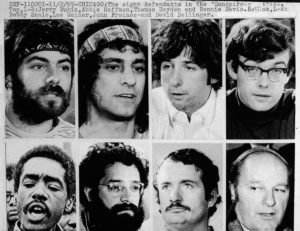 I feel sorry for the judge, Julius Hoffman. He was from a generation that was trained to be polite. He presided over a trial of radicals who weren’t afraid to display extreme behavior to get their points across. And display it they did.

One particularly stormy day, Hoffman and Rubin walked in dressed in judicial robes. Hoffman blew kisses at the jury. They were charged with contempt, of course.

In reality, it all seems kind of funny now, but I recommend you read James Michener’s Kent State: What Happened and Why to understand the real fear that was felt by members of law enforcement and judges. It was a real eye-opener to me.

Anyhow, the media delighted in reporting the antics of the Seven, and Hoffman’s attempts to maintain order in his court. Hoffman was called a “fascist dog,” a “pig,” and a “racist” by Seale, hence his long contempt sentence.

In the end, they were acquitted of practically all of the charges, and the few they were convicted of were later overturned. Hoffman was reviled by the radical culture as a hopeless member of the Establishment.

Protests continue today, but more often in the milder form of slams at Oscar presentations. I don’t know about you, but I really don’t miss the days when riots would often accompany public conventions.