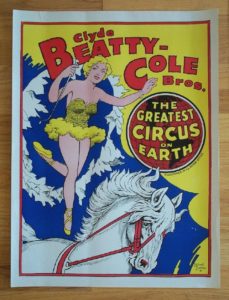 Miami, Oklahoma was definitive Small Town America. Population about 14,000, the only traffic lights were on main Street, everybody in town knew who you were.

Yet we were treated to circuses that would pass through town every year, as far as I can recall. They were HUGE, at least in a child’s memory, because they had three rings, just like Barnum and Bailey!

Circuses have always been aimed at one demographic in particular: kids. That’s why the posters are so big, bright, and colorful. Once you capture the kids’ attention, you can rely on them to beg, cajole, and eventually prevail in the mission of persuading their parents to take them to the show.

In the 60’s there were many traveling circus companies. Unfortunately, I can’t recall any of their names, but I know that two or three would visit Miami.

The circus life wasn’t easy, and people must have engaged in it out of love of the art rather than financial gain. Yet enough people stuck with it that every year, a kid would be dazzled by the sight of seltzer-bottle-bearing clowns, sword swallowers, fire eaters, and fearless trapeze artists.

The bad economy of the 1970’s was hard on the circus trade. Some circuses merged, others passed by the wayside. But though their ranks may have thinned, traveling circuses never disappeared.

In fact, my own children grew up with memories of circuses. A big top circus came through town one chilly November 1995. My kids were able to enjoy an elephant ride in the drizzle beforehand, and then we shivered inside the tent as scantily-clad acrobats seriously earned their paychecks that cold evening.

One of the most successful traveling circuses still around is Circus Pages. That’s pronounced “pa hase”. The Florida-based troupe, originally out of Cuba, has a very entertaining act that is small enough to be held in modest-sized buildings. I took my kids to two of their performances over the years, and they were great. The appeal for members of the audience to help them pack up for 20 bucks an hour just added to their charm.

Nowadays, political correctness has affected the circus trade, and there is lots of pressure from animal rights groups to boycott any shows that are not animal-free. Even the Wikipedia entry seemed biased about any shows that still use animals.

While abuse has certainly taken place in the past by fleabag shows, I think banning animals in circuses is overly reactionary. It’s simply bad business for circuses to mistreat their animals, and successful above-board traveling shows like Circus Pages have a well-earned reputation of treating their animals like valued employees rather than property.

So here’s to the circuses we enjoyed as kids, and if Circus Pages comes to your town, take your grandkids. They’ll never forget it.