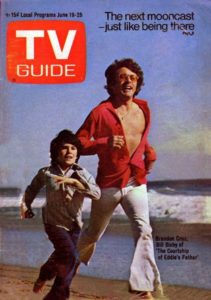 Must-see TV has changed from night to night over the years. During the 60’s, it was Sunday, with Sullivan and Bonanza. NBC reigned over Thursday nights for many years with Cosby, Cheers, Seinfeld, and ER. But go back to the early 70’s, and ABC made Wednesday night the night to stay home and watch Room 222 and the Courtship of Eddie’s Father.

You probably remember the them song more than the episodes. Harry Nilsson sang “People let me tell you ’bout my best friend” and we were given a tune that sticks permanently in minds that might begin to forget less tenacious memories.

The show was based on a movie that came out in 1963, starring Glenn Ford and beautiful Shirley Jones. The movie was a hit, and six years later, ABC execs decided to try a TV series.

But this wasn’t your father’s TV show. It was very offbeat, well written, and darned entertaining. Each episode would begin with a conversation between Eddie (Brandon Cruz) and his father Tom (Bill Bixby). Eddie wanted a new mommy, to replace his departed one, and dad was open to the idea as well.

Of course, like all sitcom families of the era, they had a maid. Her name was Mrs. Livingston, She was a wise lady who could occasionally get her feelings hurt, as I recall. I recall one episode where Eddie was explained the facts of life with pollination as an example. He suggested his father pollinate Mrs. Livingston so she could have a baby. I told you this wasn’t your father’s series.

However, it was all very innocent. There was nothing suggestive at all about the series. Familiar characters Uncle Norman and his secretary Tina would be regular visitors, with some saying the show jumped the shark when episodes were devoted to Uncle Norman instead of Tom and Eddie.