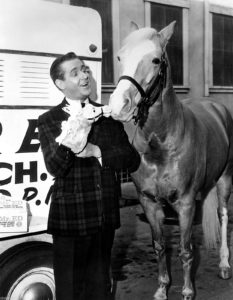 One memory that we Boomers have indelibly burned into our collective psyches is a theme song about a talking horse. We also have the sound of a baritone voice saying “Willlburrrr!”

The horse is, of course, the famous Mr. Ed. And it was very few black and white TV’s of the 60’s that didn’t have the beautiful palomino gelding on their screens during the Decade of Change.

Mr. Ed first appeared as a syndicated series in January of 1961. CBS spotted a potential hit, and soon grabbed it up. Originally set to be titled “The Alan Young Show,” the human star balked, in case the wacky premise of a talking horse’s day-to-day life should prove to be a bomb. He needn’t have worried.

Mr. Ed was conceived of by children’s book author Walter R. Brooks. He delighted kids with tales about talking animals on the Bean farm in upstate New York. Despite the eventual popularity of Mr. Ed, it was Freddy the Pig who was the star of the literary series. Such are the foibles of fame…

Mr. Ed also owes his origin to the Francis the Talking Mule series of comedic movies that was released in the 50’s. Francis would only talk to a single human, acting like a normal equine to everyone else, to the eternal consternation of the human. This was, of course, the same premise of Mr. Ed, the TV show.

Mr. Ed was played by a gelding named Bamboo Harvester. He had a number of voice actors. The speaking roles were provided by cowboy movie actor Allan “Rocky” Lane. When he sang on the show (I particularly remember “The Pretty Little Filly with the Pony Tail”), the voice was provided by Sheldon Allman, who also penned the tunes. Allman’s most famous creation was the pleasantly bizarre theme to cartoon showGeorge of the Jungle.

However, the unforgettable opening theme was written and sung by Jay Livingston, who prolifically produced smashes like Que Sera, Sera, Mona Lisa, and Buttons and Bows, among many others.

The show’s plots centered around the amazingly intelligent horse and his communications with Wilbur. Ed didn’t talk to anyone else, other humans were beneath his intellectual level. This caused great consternation for Wilbur, as, for instance, his wife felt like he loved the horse more than he did her. If she would have only known that the horse talked…

The idea was successful, and crack writing and acting made for a TV classic that ran for six years. But it was in syndication afterwards that I soaked up episodes in my daily ritual of watching TV after school.

Mr. Ed enjoyed a long run of syndication which was further enhanced by the eventual appearance of cable station Nickelodeon, which began airing episodes of the show in 1986. Nowadays, the first two seasons are available in their entirety for free at Hulu.

Like many TV franchises, there were controversies raging behind the scenes of Mr. Ed.

For example, the pilot featured a unnamed chestnut gelding, who was unceremoniously dumped in favor of the prettier blonde star. This wasn’t the first time Hollywood spurned beauty over superior acting. BTW, the previous statement was delivered with tongue firmly in cheek.

However, more substantial controversy swirls around the eventual end of Bamboo Harvester, as well as his final resting spot.

Tahlequah, Oklahoma has long claimed the gravesite of the horse, who was said to have passed in 1970, euthanized after failing health. Alan Young decries this story, however, claiming that the real Bamboo Harvester died sometime after this after being overdosed with a tranquilizer by an inept stablehand. Adding fuel to the fire, in 1979, a horse (again in Oklahoma) died which was used for still photos during the show, thus garnering headlines of the passing of Mr. Ed.

Maybe the real one is buried in Giants Stadium?

One thing’s for certain, though, they just don’t make TV shows like that anymore. How fortunate for us Boomers that we grew up in the right era to enjoy sharply written series which came with their own unforgettable theme music.

Quick, can anyone come up with the song for Detroit 1-8-7?