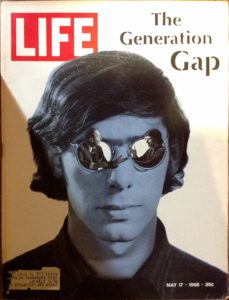 Generation gaps have always existed. The kids who grew up in the 1870’s would always consider those newfangled horseless carriages to be a noisy waste of money. The generation who grew up with the first automobiles further stunned and alienated their parents by partying hard to jazz in the 1920’s. But one of the greatest generation gaps in history was the one between Boomers and their parents and grandparents.

My father was born in 1919. He spent his teenaged years in the Great Depression. Pleasures and pastimes were few for him, as he weathered harsh economic times on a Minnesota farm. Poor dental hygiene cost him his teeth by the age of thirty. So entertainment and having fun were rather low on his list of priorities. In addition, he was put off by loud rock and roll music, and saw little rhyme or reason in the student protests of the 60’s.

He was a great father, but you can see how his thinking and the thinking of his offspring would be so different.

The parents who worked so hard to provide great lives (including healthy teeth) for the post WWII-born children would one day find themselves on the opposite side of the fence, so to speak, with the cultural, musical, and political preferences of their children. For instance, to refuse to go to war in 1942 would have stigmatized an individual as yellow, or cowardly, or as a draft dodger. Some did seek conscientious objector status, but they bore the wrath of society for doing so.

However, many Boomers had enough chutzpah to question the very morality of the war in Vietnam, and to thereby burn draft cards and loudly protest and refuse to go, fleeing to Canada or going to jail, if necessary.

Indeed, it was our comfortable middle-class households that allowed us to be so rebellious. Many of us grew up in Spock-inspired upbringings, where children were allowed to have a voice in how they were raised. This certainly encouraged expression of opinions and beliefs. But even if our parents were disciplinarians (mine certainly were), we still had easy childhoods compared to them. We weren’t working in the fields for fourteen hours a day like they might have. No, we were at home watching the Mickey Mouse Club.

It wasn’t just being willing to defy authority that made Boomers different. Our parents grew up listening to much of the same music our grandparents did. The Jazz Age was an urban phenomenon, and the large rural-raised percentage of the WWII generation grew up unexposed to its excesses. As a result, the whole family would gather around the radio and enjoy the same music.

That all changed with the birth of Rock and Roll.

Suddenly, teenager’s radios were blaring out music that sounded debased to our conservative parents. It sounded like it was being played by . . . Negroes! Who would listen to such noise?

Indeed, many were shocked to see Elvis on Ed Sullivan for the first time and to discover that he was WHITE!

Of course, we kids love it. We liked it to be played loudly, as well. Our poor parents, used to the soothing music of the Ink Spots, Eddie Fisher, and Sinatra were repelled by this new musical phenomenon.

Another thing that they found shocking was the fact that drug use was becoming commonplace. This must have been more shocking than the other two differences put together.

But not all of us protested the war or dropped acid, though it’s hard to imagine a Boomer not being into Rock and Roll. But even if we lived more straight-laced lives than the hippies on the nightly news, there’s no doubt that our thinking was a whole lot different from that of our parents. And that constituted a massive generation gap that has not been repeated since.