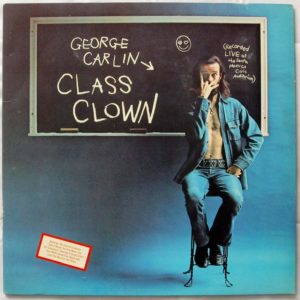 The year was 1972. George Carlin, brilliant comedian best known at the time for his portrayal of the “Hippy Dippy Weatherman” on Johnny Carson and Flip Wilson Show appearances, released an album called Class Clown. The album, which appeared without parental advisory labels way back then, contained a magnificent, highly offensive routine called “Seven Words You Can Never Say on Television.”

The Seven Words, which you can view here in all their profane glory, exemplified Carlin’s rapier-sharp intelligence when it came to deducing how society works. Clark Gable used what was then known as “the D word” way back in 1939 in Gone With the Wind, and from then until 1972, many formerly taboo words had become acceptable for broadcast television.

But there was no doubt about it: in 1972, there was NO WAY you would hear any of Carlin’s Deadly Seven on broadcast television.

How times have changed.

Carlin, who taped the album in Santa Monica, California, was arrested later that year in more conservative Milwaukee for performing the sketch onstage. The charge? Violating obscenity laws. It was tossed by a judge soon afterwards, but the bust still earned the comedian a great deal of infamy that only enhanced his rebellious reputation.

What would happen to him today in Milwaukee? Well, obviously no charges would be filed, but equally obviously, nobody would bat an eye. You hear worse than that at a hip-hop concert. That is one of the differences, for better or worse, between the world we Boomers live in now and the one that we grew up in.

The Deadly Seven soon began becoming obsolete shortly after Class Clown’s release. One of the first to fall was the “S word.” It was frequently heard at sporting events. The dreaded “F word” also was picked up by parabolic microphones on the sidelines of football games and such. And Carlin pleaded the case that the “T word” didn’t even belong on the list. Well, it too was heard on many a live broadcast.

But the list came crashing down for me in 1982, when a local station, KTLA I believe, in Los Angeles aired the uncut version of The Deer Hunter. At each commercial break, the audience was warned that what they were seeing was the original R-rated movie.

I don’t know how they managed to pull it off without getting nailed by the FCC, but I remember pulling it in on a pair of rabbit ears over the airwaves. And, if I recall correctly, that film contained every single one of Carlin’s Deadly Seven. Repeatedly.

Nowadays, even the cleaned-up A&E version of The Sopranos is liberally sprinkled with “S words.” SNL is known for regularly receiving FCC wrist-slaps for “F-bombs.” And let’s face it, an episode of Deadliest Catch, while technically “bleeped,” leaves very little to the imagination as to what “French” is being spoken.

But once upon a time, George Carlin nailed the state of television censorship with his unforgettable Seven Deadly Words. Ironically, while coming up with seven words too obscene to say on TV is quite impossible today, there are probably hundreds of words too Politically Incorrect to ever make the airwaves. And lovable Otis the drunk on Andy Griffith, or Foster Brooks at the Dean Martin Roasts? Horrors! That could never happen today! Our village-raised children should never see such excesses! Why, the next thing you know, they would be too upset to listen to Akon on their iPods!

To repeat myself yet again, what a long, strange trip it’s been, being a Boomer.