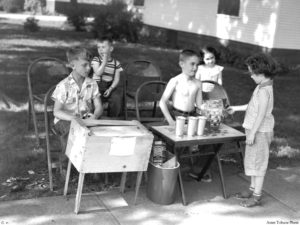 I’ve spent my entire adult life working for The Man, but always having something going on the side.

Go back to fresh out of high school, I started out as an electrician. Within six months, I had people paying me to do wiring jobs on weekends. They avoided contractor rates, I made great hourly money. Win-win, as Steve Covey would say.

When I got my first computer in 1993, I engaged in a long-suppressed passion: writing. I discovered that a word processor program would do some seriously cool stuff, like catch typos, check your grammar, and allow multiple versions of the same document. When I joined AOL the next year, I was astounded and delighted to discover that there was an actual (modest) paying market for my scribblings!

Nowadays, I lease a dedicated server and host/develop websites. I also spend an hour or two per week blogging. All the while, Little Debbie pays most of the bills. I’m just busy enough, and get some great tax breaks, thanks to my S corporation.

In my case, and, I suspect, in the case of many of you, my willingness to work evenings and weekends on my own ventures was spawned by selling Kool-Aid in my neighborhood from a stand constructed out of cardboard boxes scrounged from behind Moonwink Grocery. 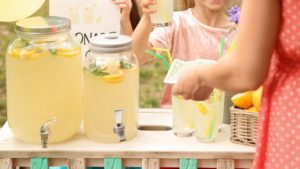 The startup costs were quite reasonable. A packet of Kool-Aid cost a nickel. The sugar was free, as far as I was concerned. So were the boxes. A childishly scrawled sign advertising drinks for a dime, and I was a businessman.

The stand was generally a summer venture. When you heard the cicadas sing, that meant that it was a hot day, perfect for picking up a few dimes in exchange for refreshing the neighborhood.

According to the disconnected voice in Field of Dreams, if you build it, they will come. This was certainly the case with a lemonade stand. I set one up several times during my childhood, and always made money. Sometimes, it would be a stranger passing by in a car who would stop and utilize my services, receiving a Dixie cup full of ice-cold goodness for their trouble. Other times, neighborhood kids would finagle a dime from their parents and pay me for something that they likely had in their own refrigerator.

Oh well. They already knew that there was a special pleasure in paying someone to pamper you. Humbly being served a cold drink by the same kid who threw paper wads at you in school, that was pretty profound.

And the parents always seemed willing to give their kids the funds to help you succeed in your business venture. Perhaps they had their own sweet memories of selling cold drinks on a hot summer day. Or maybe they knew that rewarding drive and initiative would keep a kid from someday holding up a “Will work for food” sign at a highway off-ramp, effectively spitting in the face of those who actually dare to turn in a day’s work in exchange for a day’s pay.

All of these decades later, I always try to stop and patronize lemonade stands. Sometimes, it’s the cute little girls next door who have set up their own. Other times, it will be an enterprising kid at his mom’s garage sale.

Regardless, learning that you can make honest money with a little drive and initiative is a sweet lesson that should be learned by all. And if you’re a Boomer kid like me, that lesson was first learned selling Kool-Aid in front of your house.