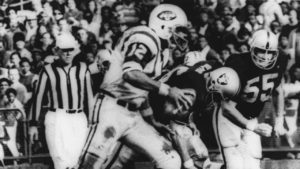 But by 1968, the AFL had become respectable. Just how respectable would be revealed by one of television’s biggest gaffes.

The Heidi Game, aka the Heidi Bowl, took place on November 17, 1968. The game was between the Oakland Raiders and the New York Jets. Broadway Joe Namath, who would guarantee a Super Bowl win at the end of the season, was facing off against his skilled counterpart, Daryle Lamonica.

The AFL had scored a major coup by getting Joe Willy to join them. He had been drafted by the NFL’s St. Louis Cardinals as well as the AFL’s New York Jets. He joined the Jets by signing the biggest rookie contract in history, and thereby did a lot to cement the AFL in place as a legitimate rival for the NFL to deal with.

NBC was covering the AFL, and had modestly successful ratings. While football was certainly a lucrative producer of revenue for them, it was prime-time advertisers who were providing the lion’s share of cash. 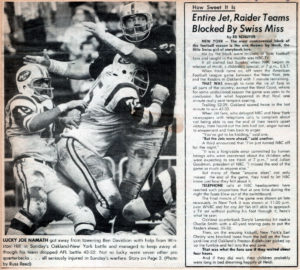 NBC was contractually obligated to Timex, the sponsor of a special presentation that night of Heidi. The movie began at 7:00 EST, three hours after the game began. NBC had instructed Dick Cline, their Broadcast Operations Supervisor, to cut to Heidi at 7:00 pm sharp, whether the football game was over or not. And Curt Gowdy, who was announcing the game, had warned the TV audience that that was what was going to happen.

The problem was that it was one whale of a game! The Jets and Raiders had been fighting a see-saw battle, and the score was Jets 32, Raiders 29. The Jets had just kicked a field goal to break the tie, and the Raiders had the ball on their own 23.

To NBC’s credit, they TRIED to change cutting away from the game. As the game drew closer to 7:00, the network heads decided to hold off broadcasting the movie until the contest was finished.

Unfortunately, thousands of callers who had heard Gowdy’s announcement were calling the network begging that the game be shown in its entirety.

The resulting logjam of calls prevented NBC from getting the word to Cline to keep the game on.

The fallout for NBC was huge. In male American minds, Heidi instantly went from a little Swiss girl to a symbol of clueless broadcasting decisions. Twenty minutes into the movie, the score of the game was scrolled across the bottom of the screen. This made fans even madder.

Angry fans sent Heidi dolls to NBC with knives stuck in their backs. The AFL (as well as the NFL) rewrote contracts that now required networks to carry games to their conclusions no matter what the scores. NBC installed a dedicated phone line to the Control Room so that programming directors could be instantly notified of any last-minute changes.

But the most positive thing for football to come out of the whole affair is that the AFL demonstrated that it had developed a rabid following. Two years later they would merge with the NFL, and the rest, as they say, was history.