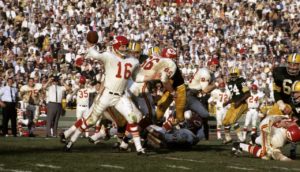 One of the coolest things about being a Boomer is that we can recall the very roots of the game which brings the USA to a stop every February, as the entire country takes time off (whether formally or informally) to observe two teams play for the championship of the NFL. In fact, some of our sweetest memories are of a time when the game was a game, not a religious observation marked by many hours of pre-game crapola and those silly pretentious Roman numerals.

Indeed, go back far enough and the very term “Super Bowl” was a mere nickname for the AFL-NFL World Championship Game. And the game itself was of interest to football fans, but not so much anyone else.

Commercials were a time to get up and go to the can. The pre-game show lasted a half hour or so. The halftime show was a time to go heat up more Ro-Tel dip. And the game itself was a sleepy demonstration of the vast superiority of the well-established NFL over the young upstarts known as the AFL.

Hmm, come to think of it, maybe it wasn’t so rosy back then after all?

The Super Bowl came into existence when the NFL could no longer ignore the lone competitor that ever arose which successfully challenged their stranglehold on the sport: the American Football League. The senior league struck a deal with the new kids which would end up in a merger three years after the first end-of-season championship game would be played. The leagues would be changed to conferences. But the Big Game would live on.

Pete Rozelle wanted to call the last game of the season “The Big One.” It might have caught on, too, but college postseason games had been called Bowls since antiquity, and Kansas City Chiefs owner Lamar Hunt suggested Super Bowl. The legend is that he did so after observing his daughter play with a Superball. In fact, the very Superball in question is on display at the the Pro Football Hall of Fame.

The first game was played at the L.A. Coliseum, which had a capacity of over 100,000. Nearly 40,000 of those seats were unoccupied. There simply wasn’t that much fan interest in seeing the very heavily favored Green Bay Packers whip up on a team from some Midwest cow town. And that was pretty much what happened, as MVP Bart Starr and the Pack trampled the Chiefs 35-10.

The tickets for the AFL-NFL World Championship Game ran at a starting price for the nosebleed section at six bucks. I seriously doubt there’s a single item for sale in the stadium of today’s game for less than ten bucks. My guess is a glass of ice will run for that.

The NFL wondered if they had done the right thing. So did CBS. In fact, most of that first game’s footage was erased, so the videotape could be used again for more important things.

The halftime show consisted of the University of Arizona and Grambling State University Marching Bands, Al Hirt, and the Anaheim High School Drill Team. I don’t have a figure on what commercial time cost, but I suspect it was somewhat less than three million bucks for thirty seconds, the price at presstime.

The next year wasn’t much better. In fact, it took a shocker by flamboyant New York Jets quarterback Joe Namath and his underdog team in 1969 to finally spark public interest. The halftime show remained a pretty staid affair, though, as various marching bands did their thing while the stadium and TV audience ran to the bathroom and/or the food stash. It took the Bicentennial to finally get a high-profile act there with the intention of continuing to hold audience attention. The performers? Up With People. The perennially optimistic group would be featured three more times before being bumped for bigger names.

It was Michael Jackson who put the halftime show over the top in 1993, the year of a particularly dismal game as the Dallas Cowboys disemboweled the Buffalo Bills by 35 points. If not for the Moonwalker, the entire country may have shut the snoozer off by halftime, with Buffalo trailing by 18 points.

Another feature of the Super Bowl which has gone from modest to pure glam is the rings awarded to the champions. The first rings were designed by Jostens, a national jewelry maker better known for class rings. Hence, the rings bore a resemblance to the ones we received in the 60’s and 70’s in our junior years at high school and college.

However, as the game gained in its godlike status, the awarded rings swelled in size, eventually becoming monstrous parodies of bad taste.

Take the rings handed out to the New England Patriots after the 39th Super Bowl in 2005. They had 124 diamonds each and weighed more than a quarter of a pound.

BTW, you might notice I refuse to use the Officially Sanctioned Roman Numerals. Ferpetesake, enough is enough. I enjoy a closely contested Super Bowl as much as anyone, but the self-importance of the whole thing is getting to be overbearing.

One last thought, a positive development in the game’s administration: a game finally being awarded to an outdoor stadium in a less-than-balmy spot. The 2014 game will be played at the New Jersey Meadowlands. That’s going to be a spectacle worth looking forward to, as fans pay hundreds or thousands of dollars for the privilege of sitting in possible sub-zero cold and watch two teams earn their stripes in the weather that football was MEANT to be played in.

Who knows, I might even use Roman numerals to refer to that one.