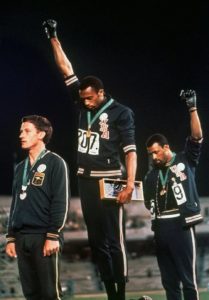 The 1960’s started off with school segregation still widespread, separate restrooms and water fountains for “whites” and “coloreds” all across the deep south, and much struggling to come to put all of this to a stop.

Such a process would have to be painful, and indeed it was. Martin Luther King was advising peaceful resistance to racism, while Malcolm X advocated killing the white devils. Fortunately, King proved to be a more effective leader.

By 1968, things had improved. Segregated schools were much rarer, but the solution of busing students long distances to integrate was not a good idea, and it was causing much anger and strife.

The Summer Olympics at Mexico City would prove to be a platform to make a statement.

There was a movement among black athletes to boycott the Olympics altogether. Fortunately, that didn’t happen. It’s never a good idea to skip the games for political reasons. Every time it’s been done, the only effect has been to diminish the Games themselves, as well as to cheat hard-working athletes out of what they have been striving for.

Sprinters Tommie Smith and John Carlos won the Gold and Bronze for the 200M. Friends and teammates at San Jose State, they agreed to make a very visible statement at the presentation of their medals.

Smith had a black glove on his right hand, Carlos wore one on his left. As the National Anthem played, they raised their gloved fists in the air. Silver medalist Peter Norman of Australia also wore a patch on his jacket supporting the organization that was seeking a black boycott of the games.

It seems pretty tame today, but it was shocking in that emotionally charged year. The gesture was met with outrage by many, admiration by others. The Olympic Committee was certainly not amused. The runners were banned from further competition and from the Olympic Village.

Smith and Carlos received death threats aimed at them and their families. Of course, so did nearly everyone else involved in the Civil Rights Movement. But history eventually judged their actions as admirable. They were honored in 1998, and there are plans to build a statue at their alma mater commemorating the incident.

Here’s to standing up for what you believe, even if it makes you unpopular.