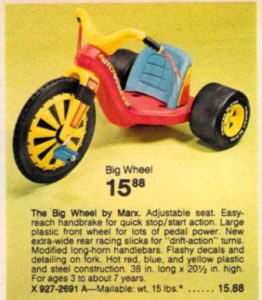 You might say I was born at the perfect time. Those born in 1959 avoided the most dreaded of fates: being drafted and sent to Vietnam. On June 30, 1973, the draft was officially ended. I was about to turn fourteen. On March 29, 1975, even registration stopped.

And being teenagers in the 70’s, we were shielded from many scourges that appeared later, notably inexpensive recreational drugs. While my religious upbringing kept me out of trouble anyway, our generation as a whole never got hooked on things like crack, meth, or other cheap addictions, at least as teenagers.

But those of us who remember JFK were sadly cheated out of one delight: the Big Wheel trike.

This column marks a milestone for I Remember JFK. It is being written in response to its being requested by site visitors. And that’s a good thing. It means we HAVE visitors ;-).

The Big Wheel was developed by Marx Toys and introduced at the 1969 New York Toy Fair. In 1972, a company called Carolina Enterprises introduced the Hot Cycle, a successful Big Wheel clone. By the late seventies, the two companies had merged to become known as Empire Industries. By then, practically every household in America with ten-year-olds also had a Big Wheel (or two) sitting in the garage.

While the Big Wheel was introduced when I was ten years old myself, they didn’t make it to northwest Arkansas where I was living at the time until the early 70’s. By then, I was simply too gangly to fit on one. Besides, trikes were for KIDS!

But I used to watch jealously as younger ones would tear down the street, pull that brake, and do incredible spinouts. Try THAT on a regular tricycle!

The Big Wheel was a major hit for many reasons. First of all, it looked stinking cool to a kid! Second, it was composed mainly of inexpensive plastic, so it was cheaper than a regular trike. And it was also safe, its low profile making them impossible to tip over in even the most wicked spinouts.

Despite the sales of untold millions of Big Wheels in the 70’s and 80’s, Empire Industries went belly-up. Big Wheel sales had plummeted for some reason. But they have been revived, and Boomers can buy one for a grandchild at the local discount store.

Just don’t be surprised if you again find yourself jealously watching a younger one doing bonzer spinouts.

One thought on “The Big Wheel Trike”