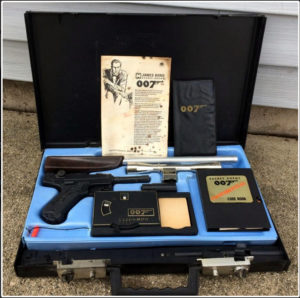 The year was 1965. I was six years old. The James Bond Attache Case was considered the holy grail of toys. It was heavily advertised, and millions of kids all over the US were relentlessly nagging their parents to pony up ten bucks for this utterly magnificent collection of spy stuff.

My nagging paid off. I received one that year. I was the king of the block.

The attache case came loaded with gear that transformed you into a spy to rival Mr. Bond himself. There was a Luger pistol with a silencer. It shot real rubber bullets, as I recall. There was also a knife that transformed into a gun. Other items included a wallet with cash, a passport, business cards, a decoder, a holster for the gun, and the case, which was amazing in itself.

You could booby-trap the locks so that caps would go off if an intruder tried to break in. Also, the gun lined up with a hole in the side, allowing you to shoot it by pressing a button from the closed case!

I had lots of cool toys, but I don’t remember any that were more exciting for a six-year-old kid. It took forever just to get all of the components out of the case!

In researching this piece, I have found that this is a very treasured collectible. Mint sets go for thousands of dollars! Imagine putting about ten of these away in 1965. Even partial sets go for hundreds.

I count myself very fortunate that my parents sprang for the steep price and got me one of these. I have no idea where it is now, but I hope at least part of it survived to be in someone’s collection.