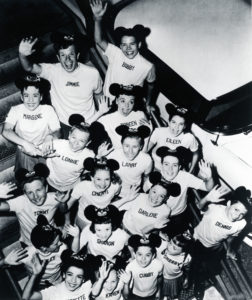 Most everyone, Boomer or not, can recall the first time they fell in love. I certainly do.

I was five years old, and watching the Mickey Mouse Show when Annette (I didn’t know her last name) appeared on our black-and-white television. What a beautiful young lady.

The Mickey Mouse Show is a strong memory in the minds of a wide range of Boomers. That’s because it was rerun after its initial life, so youngsters like myself who missed its original 1955-59 run could enjoy it after school like their older brothers and sisters did.

Walt Disney, who had already scored big in movies and amusement parks (well, just one amusement park in those days), proved to be a television genius as well. His Sunday night show, whose name kept changing, was a strong, long-lived hit. His second shot at a series was this one. And its immortality is its legacy, even though the show itself ran a mere three years. A fourth season was produced by re-airing earlier episodes.

Walt Disney insisted the Mouseketeers be regular kids, not actors. And they were, when they were discovered by scouts who combed schools looking for kids who had magnetism and talent. Of course, many of the Mouseketeers went on to bigger and better things afterwards. But when they first appeared on TV, they were unknowns. 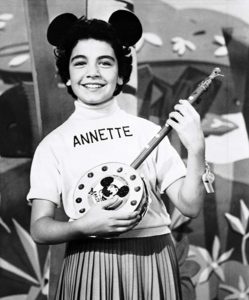 The show was classic low-budget genius. Host Jimmie Dodd was asked to write a theme song. He penned the immortal “M-i-c! k-e-y! m-o-u-s-e!” Roy Williams, promoted from staff artist to costar, was asked to come up with clever headwear. He recalled an old Mickey Mouse cartoon where Mickey doffed his ears and hair like a fedora. The effect was recreated into one of the most purchased novelty hats in history.

And like many low budget efforts, it was absolutely brilliant. The show was an excellent mix of personalities. The writing was above par. And so many of its routines were burned indelibly into our young minds!

Who can forget the roll call? Talent Round-Up? Circus Day? The serials?

The show was canceled after four short years. One account has Walt Disney protesting ABC’s wanting to cut show time to add commercial slots. Another has the show’s high costs simply making it unprofitable. High costs? The castmembers did creative work too, ferpetesake!

Anyhow, an unfriendly parting of ways took place. Disney sued ABC and won, but also lost the rights to shop the show around to other networks.

But we Boomers remember the original show. And we all know it was the best one. After all, it was the one that featured (sigh) Annette. And one last memory: Jiminy Cricket taught me how to spell encyclopedia and thereby blow away my first grade teacher. Priceless.