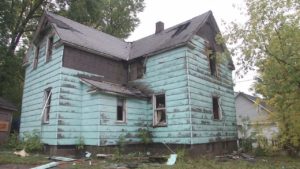 People build lots and lots of houses. And sometimes, a few of those houses may become abandoned. Once that happens, it doesn’t take long for them to quickly deteriorate into an eyesore. Or perhaps a better term may be a really cool place for kids to play.

Miami, Oklahoma, population about 12,000 circa 1967, had a few abandoned houses here and there. One of them was just up the road a block from my house. It sat all by itself, thickly overgrown by bushes and such.

It drew the neighborhood kids like Mecca draws the faithful.

Of course, I don’t have pictures of “the old house,” as we neighborhood kids referred to it. And when I revisited Miami just a couple of years after we had moved away, it was already gone. But my memories of the secretive place are keen even today.

Of course, the primary function of an old house was to server as Command Central for games of Army. Perhaps it was just a local thing, but the neighborhood kids and myself didn’t play much cops and robbers or cowboys and Indians. No, we were soldiers. Perhaps it was the G.I.Joe influence of the times.

Anyhow, that abandoned house was where all battles against the enemy were launched. Warfare would take place within the house’s confines, as well, as we would squeeze up against the wall and sneak our way up to the doorways, and suddenly let out a yell and start shooting.

Another cool thing about old houses was that you could break windows, write on the walls, or do pretty much anything else you chose (short of lighting fires) and nobody would care. It was a nice break, as opposed to the rigid rules we had to observe in our own homes.

Plus, sometimes there were cool things to be found. It wasn’t unusual to find an old Mercury dime or buffalo nickel in the dirt outside or perhaps in a crack in the floor. 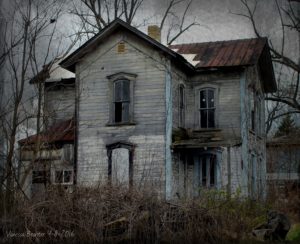 And you could also let your imagination go wild. Sitting on the overgrown back stoop, you might picture just who was living there and what they were doing ten or twenty years ago. Maybe there was a kid your age then, who had to careful to pick up his room, now littered with pieces of plaster that had fallen from the rain-soaked ceiling.

Of course, some abandoned houses were simply dangerous, and scary to boot. Two-story houses frequently suffered from wood rot that made venturing up the stairs an experience that might well involve plunging through to whatever lay below, perhaps breaking an ankle in the process.

Despite the potential for danger, abandoned houses were a big draw to adventuresome little boys. They still are, I reckon. However, before I close on the subject of abandoned houses, I must comment on one that is very close to me.

You see, a childhood home of mine now sits abandoned with a “KEEP OUT” sign in front of it. I stepped in anyway, figuring that if a sheriff or the like showed up, I could explain that this used to be MY house.

Anyhow, as I walked through the rotting structure, the memories came flooding back. That’s where I sat in the living room floor as my beloved Kansas City Chiefs fell to those blasted Dolphins in the marathon playoff game of 1971. There is my wood-paneled bedroom, where my posters of Johnny Bench and Roberto Clemente once hung. And there was broken plaster on the floor that I used to have to be careful to keep clean.

Abandoned houses could be fun as a kid. But to an adult, they might provide something much more introspective.

One thought on “The Old Abandoned House in the Neighborhood”