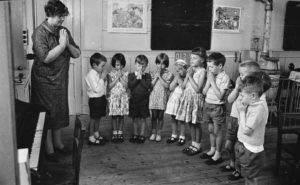 Wow. You want to see a hornet’s nest of opinions? Try typing “praying in school” into Google.

However, this site is subtitled A Baby Boomer’s Pleasant Reminiscing Spot. Ergo, no controversy here. No, instead, I offer a peaceable remembrance of when prayer was a part of school, and nobody really thought a thing about it.

My first day of public school was sometime in early September 1966. I have vivid recollections of that day, and indeed, it will be a future column. It was a very scary place, because I had never experienced anything like it before.

After all, Mrs. Adams’ kindergarten was held in her home. Nothing was too scary about that. But real public school involved walking into a modern building (probably erected circa 1960) and dealing with bright fluorescent lights, loud bells, and strict law and order.

What kid wouldn’t want to pray under such circumstances?

Evidently, Mrs. Cottam felt the same way. So mornings would involve two different rituals: saying a prayer, and reciting the pledge of allegiance.

In later years, organized prayer depended upon the whim of the teacher. Ironically, I remember reading about prayer being banned in schools in My Weekly Reader at the very same time that my fourth grade teacher would ask a different student each day to lead the class in a pre-lunch prayer.

It was a bit confusing, to be sure.

But I don’t recall being emotionally scarred by the “heinous” practice. Indeed, organized prayer in school was simply something we grew up with, for better or worse, along with our parents smoking, corporal punishment, and Vietnam war protests.

Nowadays, our kids have to pray on the sly, as even a “moment of reflection” has been decreed by the Powers That Be to be over the line. And I’m not sure that’s a bad thing, because my religion was taught to me by my parents. And my children’s religion was taught by myself and their mother. I’m not comfortable with a state-supported school delving into matters beyond scientific explanation.

But we Boomers can remember when religion was a part of the daily school routine, and as far as I know, it didn’t kill anyone.

One thought on “Praying In School”