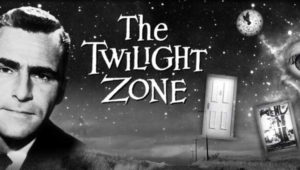 It is a special work of art indeed that is defined as timeless. Example: Botticelli’s The Birth of Venus is a great work. However, it’s da Vinci’s Mona Lisa that continues to capture one’s attention, as that mysterious, enigmatic smile forces us to try to deduce what was behind it. A timeless work of art touches us in a fresh manner each time we view it.

In the world of television, the birth of a timeless series took place on the Friday night of October 2, 1959. That was the first officially aired episode of The Twilight Zone.

Writer Rod Serling, who must have had the single most dramatic voice ever bestowed on an individual, had sold a teleplay to CBS in 1957. It took a year before the episode was shown on Desilu Playhouse. The Time Element was a smash, and Serling was given the go-ahead to produce a series that followed the same premise of a weekly presentation of a dramatic short story. 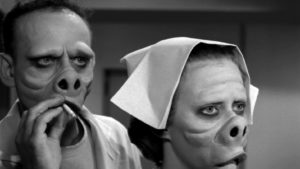 The first thing that would grab you about The Twilight Zone was the opening sequence. That theme, actually a compilation by Bernard Herrmann (the orchestral section) and Marius Constant (the guitar), defied classification. Whatever music you would call it, by the time it faded out, you were ready to follow Serling on whatever strange, disturbing journey he would have for the week.

However, for most of us, the memories we have of watching The Twilight Zone didn’t involve Friday evenings. The show was syndicated and shown as reruns by local TV stations, then later by cable networks.

It’s not just ready availability that defines timelessness. The shows were shot in sharp black and white and permanently recorded for posterity, unlike many early series which exist only in the form of grainy kinescopes. Thus, we can view them in their original high quality.

But it’s the writing, the acting, and the sheer edginess of the episodes that makes watching them a must, some fifty years after they originally debuted.

A typical episode would involve a setup scene that might be taking place in Anytown, USA. But within a minute or two, you could tell that something just wasn’t right. There was a foreboding in the air, and Rod Serling’s voice would then give you the rundown of what was about to happen, followed by a commercial cutaway.

What followed next was frequently the product of Rod Serling’s imagination. He personally penned 92 of the series’ 156 episodes. Others were written by SF writers Harlan Ellison and Ray Bradbury, among other literary greats. 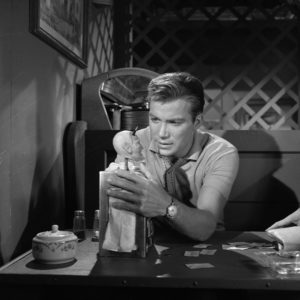 The episodes weren’t designed to make you relax. In fact, you were often kept on the edge of your seat as you waited for the flaws that were so apparent in the characters to cause things to come apart at the seams.

Or perhaps an episode might carry the theme of one voice of reason struggling to make others hear. Such was the case with “Nightmare at 20,000 Feet,” where mental patient William Shatner sees the gremlin trying to destroy the airplane he’s flying on, or “It’s a Good Life,” where Lost in Space’s Billy Mumy terrorizes a town with his mental powers, and Don Keefer’s character tries to convince the other adults that killing the child is the only thing that will save mankind.

The plot twists were legendary as well. Who can forget the removing of the facial bandages in “The Eye of the Beholder?” Everyone in the hospital room is horrified by the woman’s appearance. Yet, she is the only beautiful person in a world full of monstrous countenances!

One particularly strange episode I recall starred Carol Burnett and Jesse White, better known as the Maytag repairman. The show had a laughtrack! Even though a recent viewing on the SciFi channel had the laughtrack missing, this Wikipedia entry confirms that my memory wasn’t playing tricks on me.

The series was nearly done in by failure to locate a sponsor in fall 1962, which caused it to disappear from the schedule for a time. It showed up again in January 1963, but was finally canceled a year later.

The show was exhausting to Serling, who was writing less and less episodes. ABC expressed interest in taking the show over and heading its plots towards witches and warlocks, but Serling refused. He ended up selling his interest in the show to CBS. The lack of say that he and his heirs had contributed to revivals of the series in 1985 and 2002.

The revivals always paled in comparison to the original, even though they managed some limited success of their own.

After all, an image of the Mona Lisa on a t-shirt just isn’t the same as viewing the original at the Louvre.