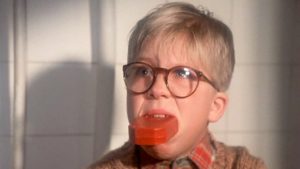 One of the most obvious differences between the present day and the world we Boomer kids grew up in is the amount of naughty words flying through the air. What would our grandparents think if they heard modern-day conversations at the shopping mall? Anyone who watches network television is now subjected to a number of George Carlin’s famous Seven Deadly Words on a regular basis. Shocking stuff to someone who might have just time-traveled here from 1965.

Profanity, I discovered, has a very interesting history. Taboo words have been largely generational. Thus, thumbing one’s nose is nowadays considered a childish insult. But go back a hundred and fifty years, and “cocking a snook,” as it was then known, was as obscene as the modern-day one-fingered salute.

The scatological S-word has taken the opposite track. Once, it was as proper to use as, say, the term “feces.” But somewhere along the line, it gained a reputation for vulgarity.

One thing’s for sure, though. Words and expressions that were sternly forbidden by society in general, our parents in particular, are now quite commonplace, for better or, mostly, worse.

But other pendulums swing in opposite directions. Take ethnic terms, for instance.

1960’s Miami, Oklahoma was ethnically diverse, to a degree. The degree consisted of two races: white, and Native American. Of course, back then, the latter race was “Indian.” But nowadays, that word has taken on some tarnish. Thus, you don’t hear it as much as back then.

We kids also grew up using the infamous “N” word with great innocence and lack of ill will. We used it as a playful insult, the kind of name you’d call a friend in jest. If you were really mad at someone, the N word would NOT be in the arsenal of insults you would fling at them.

Perhaps the absence of blacks in 1960’s northwest Oklahoma is why we used the word so freely. I would never dare utter it during trips to Tulsa, as we knew that it was indeed a strong insult when used on those whose family histories include slavery.

But at the schoolyard, one of the favorite tricks to play on gullible friends was to say “Guess what?” “What?” “you’re a N- and I’m not!”

Nowadays, that expression, when used by anyone other than a black person, carries the same social stigma, or perhaps one even stronger, as that of the classic F word.

The whole lightening up of the on-air use of salty language has to be traced back to Rhett Butler’s famous adiós statement to Scarlett O’Hara. The rumor has long been that David Selznick was fined $5,000 for putting the word “damn” in the film. However, the fact is that the Motion Picture Association board passed an amendment to the Production Code on November 1, 1939, to insure that Selznick would be in compliance with the code. The amendment allowed the use of two words, hell and damn, as long as their use was occasional and necessary to the storyline. The first hurdle had been removed.

It didn’t take long for those two words to be used more than occasionally. Profanity steadily increased throughout the 40’s and 50’s. In 1966, Who’s Afraid of Virginia Woolf? was released with an M rating, suggesting the film should only be viewed by mature audiences, due to its use of of the “GD” combination. The next year, the F-bomb made one of its earliest appearances in two British films, and the S word turned up in the American release In Cold Blood.

My own wake-up call came in 1973, when I saw Cops and Robbers. I was stunned to hear language that had only been heard behind the school woodshop in a film rated PG.

Television was quick to follow. G-D was one of the earliest harder curses to make it on the air, “son of a bitch” was close behind. I remember Alan Alda used that term in a 1979 MASH episode to great effect in insulting a South Korean officer who was transporting a female civilian to her execution.

Thus today, television profanity is either out in the open or else bleeped just barely, often the beginning and end of the word or phrase left audible.

However, to bring all of this into perspective, perhaps we should look at the works of William Shakespeare.

The bawdy bard liberally sprinkled his works with words like Gadzooks, Zounds, God’s bodkins, God’s body, by God’s mother, and most horrifying of all, “God’s blessing on your beard.” In Shakespeare’s time, combining the use of God with a sarcastic reference to a man’s beard was right up there with today’s “M-F!”

In other words, Shakespeare’s plays were largely of the R-rated variety, or at least PG13.

Obviously, there’s a balance in there somewhere.

But by and large, many if not most Boomers fondly look back on a time when one used foul language at the risk of a mouthful of soap bubbles, and one was protected from such offensiveness on television and at the movie theater.