On June 26, 1969, a movie was released that was a gritty, druggy smash hit with both the critics and the public. Easy Rider was the talk of the nation. As Captain America and Billy captivated audiences, NBC execs noticed.

The rampant drug use, violence, and nudity of the original film would never fly on 1969 televisions (even though it is now shown practically uncut on AMC), but the idea of saying to heck with society and taking off on a motorcycle had already come to life as a TV movie that was aired on the network in March of that year. After Easy Rider’s success, Then came Bronson was greenlighted as a series.

Singer/actor Michael Parks played Jim Bronson as a rebel, but a polite, friendly, quiet one. 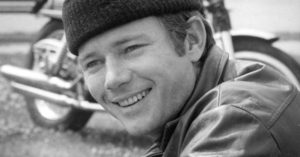 The show would open with a harried businessman driving a car expressing his envy of free spirit Bronson while sitting at a traffic light. A friendly exchange would take place, which, according to Wikipedia, went thusly:

That phrase, little heard before the show began airing, continues to be one of the most-often used in the English language.

Then Came Bronson had a run of only a year, but its fans (which include Yours Truly) were rabid in their adoration. Bronson was a regular Joe who just got fed up with life after his buddy at the newspaper (none other than Martin Sheen in the film) committed suicide. So he did what any red-blooded American rebel would do: got himself a Hawg and hit the road.

Bronson’s red Sportster with the triangle logo on the gas tank continues to be imitated by fans over thirty five years after the show’s one-year run. See what I mean about rabid?

Parks singing talent also nailed him a Top Forty single in 1970: Long Lonesome Highway. The song peaked at #20, and I still can remember all of the lyrics, even though I haven’t heard it since I was a teenager.

Parks’ low-key, humble acting style endeared him to many, including myself. He continued a fairly successful career after Bronson was canceled in 1970, and eventually hooked up with Quentin Tarentino to get some primo roles in films like Kill Bill and Grindhouse. He passed on in 2017.

We Bronson fans feel like the axe fell way too soon on his TV show. Parks himself was a shining example of the good that comes to those who hang in there.