Every previous generation had it tougher when they were kids. My own children grew up in a world of Nintendo, VCR-recorded cartoons and movies, and light-up-sneakers. My world was playing outside all day long, black-and-white TV, and PF Flyers. Our parents, of course, grew up during the Great Depression. Food was much more on the minds of many of them rather than play.

But we Boomer kids enjoyed the privileged days of play that our parents never enjoyed. Instead of spending long hours working in the field, as did my father, we spent long hours pursuing imaginative new forms of play.

After all, asking for toys meant hearing about those long hours working in the field all over again. So we learned to keep our requests for toys at a strategic, effective minimum, and to make toys out of things at hand. Many times, these things were provided us by various members of the plant world. 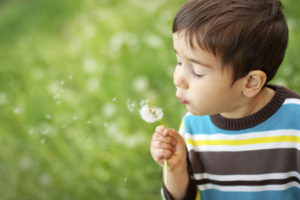 For example, springtime meant natural helicopters! Our neighborhood had lots of those nasty silver maples that nowadays I view as brittle-branched, too-fast-growing giant starling nests. But when I was a kid, all I knew about silver maples was that they would deliver a bumper crop of miniature helicopters every May.

You would throw a maple seed like a dart as high as you could, then watch it come spinning earthward like the Hueys that we saw a half a world away every night on the news.

Sure, you would get tired of it after a while, but an hour or so later you would spot another maple seed lying on the ground and the fun would start all over again.

Our yard was kept neatly mown, but it was by no means ever in golf course condition. Witness the thousands of dandelions that would spring up all over our corner lot.

After a couple of days of blooming yellow, the flower would magically transform itself into a little sphere completely covered with miniature parachutes. Picking dandelions and blowing the seeds all over the place was an activity completely irresistible to a seven-year-old. Any neighbors who were striving for the golf course look with their yards would have harrumphed their displeasure, but we kids didn’t notice if they did. We were too busy launching planeloads of paratroopers over Germany.

That reminds me of an interesting little fact about playing army. We NEVER acted like we were in Vietnam. Young men in our neighborhoods were actually dying over there, there was nothing light-hearted about that. No, we picked a nice harmless vanquished enemy, those pesky Germans.

But play with plants wasn’t only a boy’s activity. Girls figured out how to have fun with them too. At Nichols School in Miami, Oklahoma, many early fall and late spring recesses were spent by the girls making clover necklaces.

They would take a clover flower with a stem at least a couple of inches long and use a fingernail to cut a small slit in the stem end away from the flower. they would then take another clover flower, thread the bare stem through the slit until the flower head stopped it, then repeat the procedure. Eventually, they would create a beautiful necklace or tiara made from nothing but clover flowers.

A boy who was sweet on one particular member of the female gender might just find himself wearing a clover necklace created by the object of his affections, at least until he started playing another round of army.

So the next time your twenty-year-old last-kid-still-living-at-home asks for a loan to obtain a new set of headphones for his iPod, tell him about how you used to entertain yourself with maple-seed helicopters.

Sure, you’ll get eyerolls, but the ultimate effect is fewer loan requests.