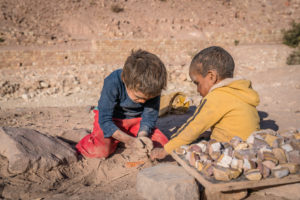 If it was a warm, sunny day, a 60’s kid would be expunged from the house by a mother who was tired of her child watching television. After all, she grew up without TV, and knew the value of playing in the great outdoors. She knew, way before it became fashionable, that kids needed to get away from the one-eyed monster. Had the personal computer invaded the home space back then, she likewise would have shooed me away from the keyboard and out into the yard to plant some indelible memories of playing in the dirt.

We had a big old tree in the front yard. I believe it was an elm. It must have been of the slippery variety, since Dutch Elm Disease would have wiped it out long ago had it been of the American species. A 1995 trip to Miami revealed the warm news that the old tree was still alive, albeit MUCH bigger than it used to be.

The tree’s roots were exposed on the surface. That was a critical part of the equation for perfect dirt play. That allowed the digging of tunnels under the topmost radicels. it also allowed roads and bridges to be constructed on the larger, flatter-on-top versions. 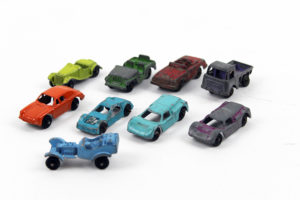 Miami, Oklahoma had some natural prairie within its city limits. That meant that over the course of thousands of years, buffalo and other large plain-dwelling herbivores had managed to keep tree growth at bay by constant grazing. As each winter would cause grass to die back, the decaying vegetative matter would add to the ever-deepening soil. The end result for me, circa 1967, was that I had some seriously great rock-free dirt in which to dig in my front yard.

I took advantage of my rich windfall by spending untold hours on my knees, patches applied to my jeans where I had worn holes, creating massive construction projects.

Dad was way too busy making a living to mess with something as trivial as keeping the lawn perfectly landscaped. That meant that the ever-shady area under the tree was largely free of grass growth, another element in the perfect dirt-digging location.

So a typical summer morning would ensue with me digging my Tonkas, Tootsietoys, green army men, and possibly G.I. Joe out of my toybox and heading out to the jobsite. That’s assuming that I had put them up from the previous session, a more likely scenario is that they had been left out there from yesterday.

With that, it was time to get to work. The bulldozer, road grader, and dumptruck were employed to make the most essential components, the roads. Their activity was accompanied by engine noises, shouted directions, and other sound effects provided by yours truly. 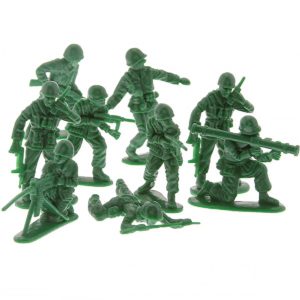 Once the roads were in place, then the jeeps, pickups, and perhaps even the semis could begin motoring their way around. The Tootsietoys were too small, but a kid’s short attention span might well be redirected to creating smaller pathways that would traverse root systems and such, perfectly sized for the little vehicles.

Keep in mind that there were no Hot Wheels in this picture, they had not yet been released to the ravenous Boomer youth.

By now, I had probably been joined by other neighborhood friends. Together, we accomplished some amazing engineering feats.

If the dirt had just enough moisture in it, it was possible to build huge tunnels, large enough to put Tonka vehicles into. Generally, we kids, who were heavily into shows like Rat Patrol and Garrison’s Guerrillas, would immediately assign a military use to the structure.

Of course, you know what that meant. The green army men would surreptitiously attack despite G.I Joe’s valiant efforts to keep them at bay, causing catastrophic cave-ins.

But it was okay. Digging for survivors was fun, too.

Despite the fact that I have a couple of massive sweetgum trees with lots of exposed roots in the front yard where my kids grew up, they never got into the dirt-digging thing like their old man did. I think the reason was that their grandparents provided them with enough toys and such that didn’t lend themselves to dirtwork that they never got hooked.

Too bad for me. I would have been more than happy to lend a hand constructing tunnels.