To continue where we left off yesterday, we watched a lot of game shows in the 60’s. The game show craze originated on radio, and carried over naturally to television.

Concentration was a show that I always enjoyed. Host Hugh Downs made a big impression on me, so much so that I think of him as the guy from this show, not Good Morning America or 20/20.

The premise of Concentration should be known to any human in the western world, so I won’t go into it. Instead, I’ll dwell on my personal memories. One frequent feature of the show was the awarding of “the envelope,” a mystery prize. Any time a contestant revealed “the envelope,” someone offstage would ring a little bell. It was a blast trying to figure out that rebus, too. I remember more than one occasion when the board was cleared, and the contestants STILL couldn’t figure it out! 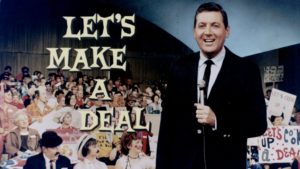 The show debuted in 1963. Host Monty Hall and assistant Carol Merrill would give audience members dressed in outrageous garb opportunities to win prizes, provided they made the right choice. Do you want what’s in the box, or behind door # 2? There might be a stack of money under the box, or a chicken. Door # 2 might contain a brand new Chevy Bel Air. Or, it might be the rusted wreckage of a 1941 Studebaker. Decisions, decisions. 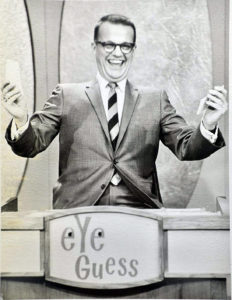 The show was a creation of Chuck Barris, who liked to bring the natural comedy of clueless contestants into play on his productions. This tactic would be brought to full fruition a few years later with the infamous Gong Show.

Bill Cullen was another familiar 1960’s face hosting game shows. I can’t look at Drew Carey without thinking of the immortal Mr. Cullen, who had a pretty acute sense of humor himself. Eye Guess ran from 1966-1969. It was a memory game. Two contestants were shown eight answers. They tried to memorize where they were on a game board. Next, they had to match a question with an answer by calling a number where they thought the correct answer was located. Calling out a wrong number could lead to some unintentionally funny answers.

Bill’s wit and mental acuity also landed him a gig as a panelist on I’ve Got a Secret, which began its run in the 50’s and closed shop in 1967. Its original producer was none other than Allan Sherman, who penned the greatest novelty song ever, Hello Mudda, Hello Fadda. It basically ripped off What’s My Line, but it was okay, because it was on the same network. I vividly remember Bill, Comedian Henry Morgan, and beautiful Betsy Palmer and Bess Myerson The fact that Steve Allen was hosting only added to the fun. I loved that show.

There were so many game shows on 1960’s TV that I’m probably going to have to add to this. But that’s enough for now. Stay tuned.