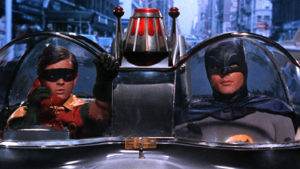 In May, 1939, DC Comics introduced an unusual super hero with that month’s issue of Detective Comics. This dude had no super powers. He relied on his wits, his physical fitness, and a belt full of cool gadgets. He also had a cave full of nifty stuff like the Batmobile, the Batplane, the Batcycle, and other bonzer crimefighting contrivances.

Batman was a comic book character, sure, but kids (and many adult fans) took him pretty seriously. These hardcore fans must have been taken a bit aback when ABC debuted Batman in January, 1966.

ABC was the perennial loser back then in the ratings race. The loser is the one most likely to take a chance on an outrageous new series to shake things up. In fact, they might try something REALLY crazy, like show two different episodes two nights in a row!

That’s what they did with Batman. Of course, it helped that the show was an instant hit, taking TWO places in the Nielsen Top Ten its first season. Kids like me were completely entranced by the uniforms, the gadgets, the jet-powered Batmobile, and the biffs, bams, and pows. But the show had an appeal to ADULTS, as well.

The producers of Batman decided early on that things were not to be taken too seriously. Hence, comedic camp was a part of every episode, and many moms and dads tuned in to see intentionally silly criminals and crimes.

I remember DC comics of the era and reading letters from angry Batman and Robin fans decrying the campy TV series. “Robin would never say Holy New Year’s Eve!” one man ranted. “They’re making a mockery out of the greatest super hero in the world!” Batman’s storylines remained fairly consistent in comics like World’s Finest, Detective Comics, the Justice League of America, and Batman’s own comic, as I recall. But hard core fans were calling for a return to the old days, when things were taken much more seriously.

All DC knew was that sales of comics featuring Batman were soaring. So what if the TV show poked fun at his image? What mattered to them was that millions of 12 cent sales were being made all over the world.

The show’s campiness made it a hit with potential guest stars. Executive producer William Dozier told of all sorts of Hollywood stars contacting him for roles as villains. Many got the gigs, including Burgess Meredith as the Penguin, Cesar Romero as the Joker, Frank Gorshin as the Riddler, Eartha Kitt as the Catwoman, and Vincent Price as Egghead, to name a few. There were also THREE Mr. Freezes: George Sanders, Otto Preminger, and Eli Wallach. According to Dozier, many others were turned down simply because no parts could be envisioned for them.

That’s okay, though. Stars could still get in on the action with batclimbs.

As Batman and Robin would climb up the side of a building, as they frequently had to for some reason, a celebrity would pop his head out to have a brief chat. Some witty repartee would be exchanged, and back to the business of climbing buildings and smashing crime. Celebs included Jerry Lewis, Dick Clark, Art Linkletter, Bill Dana, Sammy Davis Jr., Edward G. Robinson, and even a guy who sold Dozier a carpet.

As you can see, there was plenty of comedy to keep the grownups tuning in, but we kids ate up the action. One lucky neighborhood denizen had a black cape complete with an eared hood. A black mask completed the disguise. He was Batman! How the rest of us envied him. We would fashion masks of our own, though, and ride our Batcycles all over the neighborhood terrorizing criminals. It was as much fun playing the Joker and getting whipped as it was being the good guy. We would take play swings at each other and holler Biff!!! Bam!!! Pow!!!

I saw Adam West in a parade in Austin, Texas in 1966. I still get a smile on my face when I remember how thrilled I was.

The show lasted three years before its campiness got old. Still, 120 episodes were in the can, thanks to the two-nights-a-week format of its first season. Therefore, it made a lot more bucks for ABC (and ultimately DC) by being an after-school show for many years afterward. I remember seeing it on local stations as late as the 80’s, and of course on Nick at Nite after that.

If you were a boy in the 60’s, you were profoundly impacted by the Batman show. You doodled pictures of that masked face on your Pee-Chee folder, you imitated the characters in the playground, and you lived for Wednesday and Thursday nights to watch the fun.