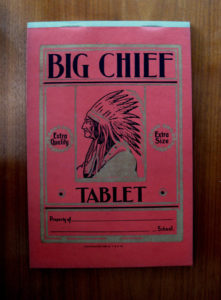 The ritual was followed every August. You would reluctantly drag your still-in-a-summer-vacation-mood bones to the store with your mom and pick out the stuff you needed at the hated Back to School sale. The items would include soft lead pencils with enough heft to beat someone to death, a wooden ruler with a strip of steel embedded in one edge, a compass for drawing perfect circles, albeit with holes pierced through the paper at their centers, a plastic protractor, and a huge monstrosity made of processed wood pulp known as a Big Chief tablet.

Schools provided lists of required items to parents spelling out the necessary supplies, citing the Big Chief tablets by name. After all, second-graders were simply not ready for finer-lined spiral notebooks, what with using those tree-branch-sized soft-leads for writing implements (and building up our right forearms in the process). 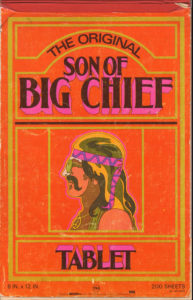 John-Boy Walton used a Big Chief to hone the writing skills that would get him off of the farm. I was unable to track down the exact date the venerable tablet debuted, but needless to say it has served untold millions of schoolkids in the 20th century.

Walking into a 1968 classroom at White Rock elementary school at tiny Jane, Missouri, you would have spied rows of small chairs with built-in tabletops, each with a red Big Chief tablet nearby ready to record the thoughts of its juvenile owner. Had you arrived at my assigned seat, you’d have noticed one with an unintelligible name scrawled across its top. While many of its pages would be used for legitimate classwork, others would be devoted to love notes to Melanie Spurlock.

The tablet stayed in tune with the rapidly changing Baby Boomer times, in the 70’s spawning a Son of Big Chief tablet featuring a Native American looking like he was ready to take over Alcatraz.

So many generations of kids used Big Chiefs, you would have thought they would last forever. Not so. The Western Tablet Company of Saint Joseph, Missouri devised the original Big Chiefs, and later merged with Mead Products (and thereby vanished). The last Big Chief rolled out of the factory in January, 2001. (update: they are being produced again, but for prices north of 15 dollars each, presumably for collectors)

Oh well, I suppose Big Chief tablets have probably been labeled as politically incorrect, along with about 90% of the things we Boomers grew up with. But it was good enough to help John-Boy Walton become a professional writer.

One thought on “The Big Chief Tablet”