Golf, the TV sport, has lived and died by the charisma of its dominant players. When Tiger wins, everybody watches. When Billy Mayfair wins, not so much.

Golf has enjoyed recent good years, TV-viewership-wise. It can be summed up in one word: TIGER. But other charismatic players have caught the public’s attention, as well. Phil Mickelson, Vijay Singh, Ernie Els, and many others are recognizable by the average person, the demographic required for the success of broadcasts.

TV golf wasn’t doing so well in the 1950’s. It was new, and boring. Ben Hogan was the sport’s big name, but he was already in decline when broadcasts began being aired. And the public wasn’t hooked by names like Doug Ford and Dow Finsterwald. That all began to be changed when a Pennsylvanian by the name of Arnold Palmer won his first tournament, the Canadian Open, in front of a TV audience watching the first airing of this particular tournament (in Canada). Who WAS this guy? He would take a drag on his cigarette, toss it to the ground, and determinedly step up to the tee and take a mighty rip, his style looking more like a Sunday hacker than a pro golfer. 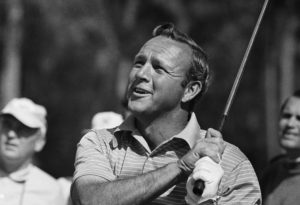 But the ball would take off like a rocket and land 300 yards away, no small feat with a persimmon driver and a wound ball whose roundness was checked by the caddy before the round. Even the balls the pros got were known to be sometimes out of round.

Arnie’s celebrity status, and golf’s audience, soared mightily when Arnie won his first Masters in 1958. This time, the whole world was watching. When he donned that first green jacket, he was king of the PGA. And the PGA was quite happy to have him reigning.

Suddenly, working stiffs who had never swung a club were tuning in on Sunday afternoons to see this blue-collar phenomenon (Arnie had actually quit playing for a time to join the Coast Guard) take mighty rips at the ball and hearing “Arnie’s Army” roar in approval.

Another factor drives golf viewership: a rivalry. This is much more difficult to accomplish, because it requires TWO superstars at the peaks of their games who are consistently dominant over the rest of the field. In 1960, a chubby amateur named Jack Nicklaus lost by a single stroke to Arnold Palmer in the U.S. Open.

The next few years would be very good for golf, indeed.

Jack turned pro two years later, and he and Arnie were familiar sights at the tops of leader boards. For example, Arnie won the 1962 Masters. Jack won it the next year. In 1964, Arnie won it back.

The public instantly loved Arnie. It took a while for Jack to grow on them. Jack was lacking charisma in the early days, but as the 60’s wore on, he slimmed down, lost the flattop, and kept winning. Arnie, in contrast, was like a bright, shining star. His game declined noticeably, although he won as recently as 1973.

Golf started the Senior Tour in 1980, and it drew more viewers than the main tour for events like the Senior PGA, which Palmer won it in its inaugural presentation. Ironically, the regular tour’s PGA was the only major tournament which eluded his grasp, having finished 2nd three times.

Arnie won ten Senior events, putting the new tour on a very solid foundation. I would say that it owes its existence to Palmer, because it could have sputtered and died in those early years.

Tiger is the Man these days. But we Boomers have fond memories of Arnie hitching up his pants, glaring down the fairway, and taking a rip at the ball with a swing that was a lot like us weekend golfers.