Many Presidents have had brothers who were also in the limelight. Most notably, our site’s namesake, JFK, had two famous siblings who also chose political careers.

But arguably, the most entertaining presidential brother as one William Alton Carter III, otherwise known as Billy.

Jimmy Carter came from nowhere to become the Democratic presidential frontrunner in 1976. The press were intrigued by this Georgia peanut farmer who had captivated the public’s interest so quickly and so thoroughly.

So small town Plains, Georgia suddenly became a haven for news crews from all of the networks, as well as many powerful print publications. They all wanted to know more about what made Jimmy Carter tick, especially his family.

They weren’t disappointed. Among his relatives were many colorful characters, but surpassing them all was his baby brother.

Billy was born on March 29, 1937, in the little Georgia community. Billy was thirteen years younger than his big brother, and was doted upon by his father, who feared that he had been too strict with the older Carter children.

Billy and Earl were inseparable, and Billy was deeply devastated by his father’s death in 1953. Earl’s death at a young age from pancreatic cancer would be tragically replayed in the Carter family again and again.

Jimmy, away in the Navy, moved back to Plains to run the family peanut business. Sixteen-year-old Billy wasn’t happy about it, and went off to join the Marines as soon as he was old enough.

Four years later, he was back in Plains, working for his older brother in the peanut biz.

Jimmy began pursuing politics in the 60’s, serving as a state senator. Billy ran the peanut operations while his brother served in public office, and did quite well.

In 1975, now Georgia governor Jimmy began his run for President. Billy was soon in the limelight as the press discovered the plain-spoken, beer-swigging businessman, now owner of his own gas station. Billy was always good for a quote.

We don’t know what was said at private family gatherings, but Jimmy staunchly kept pursuing the presidency (and ignoring his brother’s doings) while Billy entertained the media. In 1976, any embarrassment his younger brother might have caused was outweighed by the public’s resentment of Nixon’s pardon, and Carter defeated Ford.

Now the President’s brother, and ever the businessman, Billy sought to cash in. He created Billy beer, which, for some reason, bombed. It certainly wasn’t from lack of publicity. The public’s view of his hijinks began to change from innocent country-boy fun to those of an out-of-control alcoholic. Billy once relieved himself on the airport tarmac in front of the press and VIP’s who were there for his arrival. 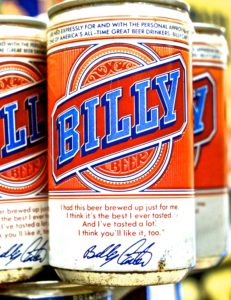 Billy soon sank into financial hardship as his beer venture failed. He ended up selling his house to pay IRS back taxes. The peanut farmer/service station owner eventually took on a job as a foreign agent of the Libyan government, picking up $220,000 in shady-looking loans in the process. He also made comments that sounded strongly anti-Semitic, though he would apologize later.

The Senate investigated, the scandal grew, and Jimmy ran for re-election. The bad press didn’t help his brother’s cause, and he lost to Reagan in a landslide.

Billy eventually publicly admitted his alcoholism, gave up drinking, and strove to help other addicts.

But in 1988, at the age of 51, he succumbed to the same pancreatic cancer which killed his father, his mother, and eventually his two sisters.

Thus ended the saga of Billy Carter, who lit up the headlines and talk show circuit in the late 70’s. Of his many quotes, this is my favorite:

“My mother went into the Peace Corps when she was sixty-eight. My one sister is a motorcycle freak, my other sister is a Holy Roller evangelist and my brother is running for President. I’m the only sane one in the family.”