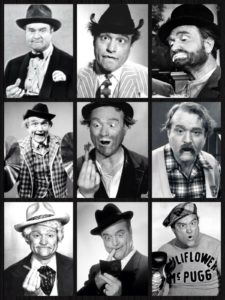 Tuesday nights were for Red Skelton on CBS.

Red, one of a few Vaudeville veterans to make it on the small screen, was the mastermind behind many of variety TV’s most loved characters, including Klem Kadiddlehopper, San Fernando Red, the Mean Widdle Kid, and my favorites: Gertrude and Heathcliff, talking seagulls who would appear at the end of the show.

I have some of the early episodes on DVD, and they seem a bit corny now. But they were great stuff in the 60’s. Klem’s little skip in the air to the tune of a bucket being hit with a stick was always good fodder for laughs. And Red’s sad clown was a tender highlight of the show.

I’ve heard that Red was tough to work with, particularly if you were a writer. Such was the case with many TV and movie icons. But I grew up with him on every Tuesday night, and I thought he was the greatest.