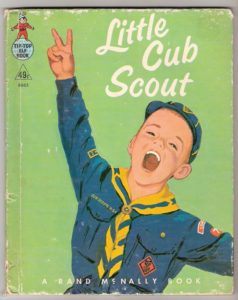 When I was eight years old, I managed to convince my thrifty father that I needed to be a Cub Scout.

The lure was irresistible. After all, I had spent two entire years at Nichols School in Miami, Oklahoma watching older kids parade around in their Cub Scout uniforms. The beautiful blue outfits, complete with those sharp blue-and-gold neckerchiefs and that cool metal device that the ends threaded through that fit up against the uniform collar . . . what seven-year-old kid wouldn’t be green with envy at the thought of actually donning such an outfit?

I’m not sure what kind of age requirements the Cub scouts have today, but back in the 60’s, you had to be eight to join. That meant I had to wait until third grade before I was eligible. But when I crossed that magical eight-year point shortly before the 1967 school year began, I began relentlessly hounding my parents to let me become a Cub Scout.

To my delight, they agreed that it would be a good idea.

The first thing my parents and I learned was that official Cub Scout gear wasn’t cheap. After all, not just any blue uniform would do, it had to be official. The same was true of that sharp-looking neckerchief. In fact, there were all sorts of gewgaws that needed to be purchased from an official Cub Scout merchandise retailer.

In Miami, it was a department store called Belk’s. That first night that we went in looking to get me outfitted with the garb a Cub scout wore was accompanied by much wailing on the part of my father. He couldn’t believe the cost of the officially sanctioned gear.

But he did spring for it. Had I walked in to my den with some sort of makeshift uniform, I probably would not have been turned away, but it would have been humiliating nonetheless. No, dad would not hear of that, so he plopped down probably twenty or so 1967 dollars to get me decked out in style. He even sprang for a toothbrush that folded up into its own case.

I remember to this day the pride I felt when I first wore that Cub Scout uniform to school. The den meetings were on Thursdays, as I recall, and Nichols would have a slew of blue-bedecked third-graders running around campus each week on that day. As soon as school was over, it was off to the den. In my case, it was a house that faced Goodrich Boulevard, perhaps a half-mile from school.

Each week the meeting provide us with a different slate of activities. Sometimes it would involve creating crafts. One project in particular that I recall was taking a chunk of 4×4 pine that had been cut six inches long, painting it, gluing a small round base to it, then attaching a mason jar lid to one side. My picture was glued to the jar lid, and “Chip off the old block” was engraved in my childish scrawl underneath it with the aid of a woodburner.

The Cub Scout manual was full of cool stuff, too, especially knot-tying techniques. I loved just taking a big piece of rope and practicing the various knots that were illustrated.

And I remember marching in parades, too.

Then there was the Pinewood Derby. I wrote about that a while back.

And the year climaxed with the Blue and Gold Banquet, an extraordinary social affair at the Nichols lunchroom that was attended by all of the scouts in Miami and their parents. Interestingly, both sets of parents was the norm at such functions, a rarity today.

The next year we moved, and the rural area I lived in didn’t have any organized Cub Scout program. Thus ended my career.

It’s been many years since I was a Cub Scout, but I still feel a little tingle of excitement in my gut when I see a proud eight-year-old schoolkid decked out in his blue and gold finery anticipating a pack meeting later on that day.