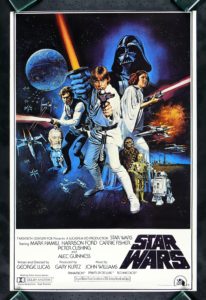 George Lucas was still flying high in 1977 from the success of 1973’s American Graffiti. However, Universal pictures turned down his latest idea: a science-fiction tale that had lots of cowboys and Indians, so to speak, and that might offend purists but which would appeal to the masses.

Universal passed on Star Wars because they considered it to be a silly movie idea. In fact, every single studio in Hollywood passed on the project except for 20th Century Fox.

So Star Wars Episode 4: A New Hope was released on May 25, 1977. That date was significant to me because it was also the day I graduated high school. So in a strange way, I am connected with Star Wars.

The movie, of course, was Hollywood’s biggest smash. Studio execs all over Tinseltown hung their heads in shame as they watched Fox get wealthy as fans poured into theaters by the millions. 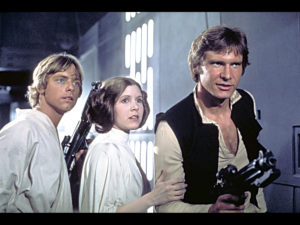 I saw the movie for the first time at the Bentonville Theater a couple of weeks after its release. It was the last movie I ever saw at the venerable cinema, built in the 1930’s. It closed for good soon after.

Star Wars could be described in one word: fun. It took huge liberties with physics, most obvious with the whooshing sounds as space ships would speed by in the vacuum of space. The infamous parsec-used-as-a-measure-of-time gaffe has been favorite fodder for discussion boards as well.

But that didn’t detract for a moment from the joy that was Star Wars. It was easy to lose yourself in the action as good battled evil, with the end results being aimed a different direction at the end of each film.

I read a Rolling Stone interview with Lucas right after Star Wars was released. In it, he revealed his ambitious plans to make the serial a NINE episode set. Since then, he has backed off and said that the six films are the finished product. True or not, it’s been a heck of a ride.

Star Wars remains as vital as it was in its inception. Contrast that with the polyester clothing we wore as we drove our massive two-door coupes to the theaters in 1977 while getting fifteen miles per gallon of gas.

We were fortunate to see the birth of two truly great movie series during our lifetimes: James Bond, and Star Wars. Both had to change personnel with the passage of time. Both are as fresh and vibrant as when they were spawned. And both contribute to our spacious memory banks of things we enjoyed as we meandered our way down the road that comprised our lifetime.