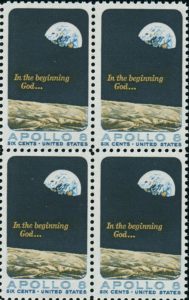 Americans are a fickle bunch, to be sure. By 1968, we had grown bored with the space program. At first, it was thrilling to see black and white images of the earth from space. But by 1968, it had grown routine. We wanted something more.

In spectacular fashion, astronauts Frank Borman, Jim Lovell, and Bill Anders gave us what we wanted: our first view of earth from the moon.

The Apollo series officially won the space race America had with the Russians. Trailing from the start, we somehow managed to catch and pass our communist rivals and beat them to the moon. This was despite a tragic beginning to the Apollo program.

In 1967, Apollo 1 caught fire during a practice run, killing all three astronauts inside the capsule. The Apollo program was grounded for 21 months before its first actual manned flight, Apollo 7. That craft never left earth’s orbit. It was Apollo 8’s destiny to become the first spaceship to orbit the moon. It wasn’t originally planned to go all the way there, but last-minute decisions were made to go for it.

The crew would ride for the first time aboard the Saturn V rocket. The most monstrous rocket ever built, it stood an incredible 363 feet tall. While unmanned tests had worked well, it still must have been daunting to be sitting atop a machine taller than a football field filled with high explosives.

The launch took place on December 21, 1968. The first-ever burn to cause the ship to leave earth’s orbit took place perfectly, and the moon grew larger and larger in their viewfinder. Another burn (lasting precisely 4 minutes and 13 seconds) would be necessary to slow the ship into lunar orbit, and it too went off without a hitch. Man was orbiting the moon. 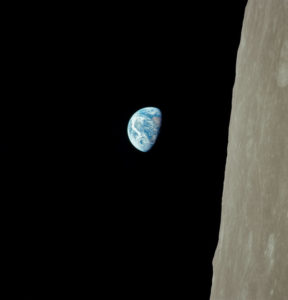 As Apollo 8 made its fourth orbit, the crew witnessed an event never before seen: earthrise. Astronaut Bill Anders looked out the window and saw a blue and white orb and realized it was the Earth. Comprehending their part in history, the crew understood that they needed to take photographs. Anders took both the first picture, which was black-and-white, and then later the more famous color photo that came to be hung on office walls all over the world, and was also reproduced on a US postage stamp.

As they orbited the moon for the ninth time, they began a television broadcast. Borman, the flight commander, introduced the rest of the crew, described his view of the moon, then, each astronaut read from the book of Genesis.

It was an amazing moment that many of us will no doubt recall, no matter how old we were.

I used to be a stamp collector when I was a kid, and I have to say that the Apollo 8 commemorative was one of the most beautiful designs I’ve ever seen.

1968 was a year of tremendous upheaval. Two great leaders were gunned down. Many more lives were being lost in Vietnam. Protests often turned into bloody riots. And the human races were treated far from equally by society.

One thing’s for certain. The year ended on a buoyant, triumphant note. We had reached the moon.