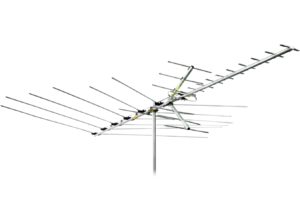 As I have mentioned in previous columns, TV reception in the 1960’s was a hit-and-miss affair. There weren’t nearly as many TV stations back then, and if you lived in small-town America, your signals might be coming from a hundred or more miles away.

An antenna rotor would be of great assistance in getting a good sharp picture to our brand new color TV’s. But they were prone to freezing up, leaving you stuck watching one channel in perfect definition, with the others reduced to snowy, static-laden annoyances.

A strong storm wind could also cause your antenna to become a tangled mass in your back yard. How could a homeowner get all local channels clearly with no worries?

Beginning in 1966 or so in Miami, Oklahoma, the answer was Cablevision.

Cablevision was a radical new concept. It was known as CATV, which stood for Community Antenna Television. And that’s just what it was. Multiple antennae would be mounted on a tall tower, each aimed to optimally capture distant stations’ signals perfectly. The signal would be greatly amplified and sent out over coax cables on telephone poles. Customers would tap into the signal for perhaps ten bucks a month and be treated to razor-sharp images of programs from as far as 150 miles away.

You might get ten channels, VHF and UHF. But the differences would be limited to local programming. There would be two NBC, three CBS, and two ABC affiliates among the dozen. There would probably be an Educational Channel affiliate, and perhaps an independent or two who might only broadcast for a few hours a day.

Dad, of course, would never hear of paying someone for TV signals he could pull in for free. So I never experienced Cablevision. BTW, I know that was the name of the company offering cable service in my hometown. But in 1973, a much larger Cablevision was founded which serves a goodly portion of the northeast USA. No relation, to my knowledge.

I distinctly remember the night Cablevision came to town. They hired a couple of WWII-era spotlights to trace lines of light across Miami’s skies. I was terrified. I had never seen spotlights before, and I was convinced that we were going to be attacked!

My imagination has proven very rewarding over the years, but I’m afraid it was a bit overactive at the age of six.

In 1969, we moved to a rural area, and I spent the next nine years of my life living in the country. Cable TV was not an option. So we were limited to whatever the antenna would pull in. One farm was nestled in a valley, so I spent a couple of years without watching a single CBS show on my TV. However, some of my city-dwelling friends had cable and I was thus able to occasionally catch a Red Skelton Show.

We moved back to town in 1976, and my father decided enough was enough. We got cable, and it included a station out of Atlanta called WTBS. The first Superstation turned my Cardinal-loving father into an additional fan of the Atlanta Braves, as it did with millions of other viewers who lived far from Georgia.

TV Guide didn’t carry TBS programming listings, so you never knew what would be on. But I watched it a lot for the great reruns of old comedies. I watched a bunch of Braves games with dad, too.

And, in a strange twist of retro-technology, I today watch HDTV programming via an antenna I mounted on my roof, due to Dish Network dragging their heels in getting our local channels in that format.

A distinct minority of viewers today choose not to use cable or satellite TV. Many of them take a break form a service, then return when they realize how much they miss a favorite cable-only channel. But once upon a time, cable was brand new, and largely scorned by frugal fathers who saw no reason to pay for something you could get for free.

One thought on “Cable TV (The Early Version)”