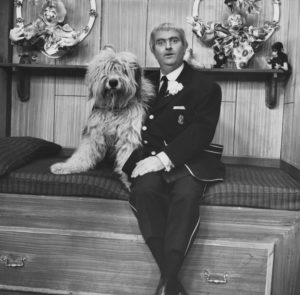 In 1955, a TV show debuted on CBS. It was a morning show aimed at children. The show’s creator, Bob Keeshan, was a talented individual with a love for kids. He was low-key, patient, and appealing to young ones.

The show would last an incredible 29 years, providing loving memories for many generations of Boomers.

The Captain had familiar guest stars, including Mr. Green Jeans, the New Old Folk Singer, and Mr. Bainter, the Painter. These were all played by veteran character actor Hugh “Lumpy” Brannum.

The Captain himself played the Town Clown who had the most enormous shoes I have ever seen.

Another funky visitor was the Banana Man. Here’s his act in a nutshell, from original Banana Man A. Robins’ brochure:

Dressed in clown attire and pushing his trunk on wheels, Robins enters singing his shrill, absurd melody. He then proceeds to produce from his pockets whole bunches of bananas, pineapples, watermelons, banjos, violin, about everything under the sun – he changes wardrobe and character three times, right before your eyes – he fills three trunks with his hundreds of props, converts the trunks into a train, and as the engineer, drives the whole string of cars offstage. 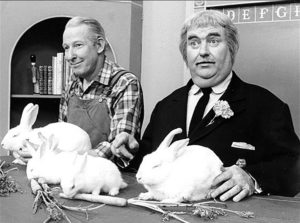 Additionally, Dancing Bear would come out and do his thing every show.

The show also featured a really cool picture that would draw itself while you watched. The pen lines would magically appear while a song played in the background.

And the songs! The first time I watched Oh Brother, Where Art Thou, I recognized opening tune Big Rock Candy Mountain as one I’d heard on Captain Kangaroo in the 60’s. Cool stuff!

There is an urban legend going around that has Lee Marvin giving kudos to Keeshan for being a war hero. While you want to believe it, unfortunately there is nothing to it. Keeshan signed up for the Marines, but didn’t see any action.

Keeshan did have discernment, though. When a remake of the show was launched in 1997, he was invited to appear as the Admiral. He viewed a few episodes and declared that he wanted nothing to do with it.