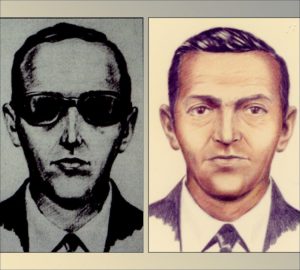 The date was November 24, 1971. A man on a Boeing 727 flying from Portland, Oregon to Seattle passed a note to a stewardess. The note said “I have a bomb in my briefcase. I will use it if necessary. I want you to sit next to me. You are being hijacked.”

Thus began the only unsolved airplane hijacking in US history. The man called himself Dan Cooper. He had done his homework, and had a plan to escape from the plane without getting caught. In fact, some speculate that he did just that, although the prevailing thought seems to be that he failed to survive his 10,000 foot parachute jump into a driving rainstorm.

The note demanded $200,000 and four parachutes. Once the actual existence of a bomb-looking device in a briefcase was established, the money and the parachutes were gotten together. The money, $200,000 in twenties, had all serial numbers recorded. Once the goods had been sent to the Seattle airport, Cooper gave the pilots permission to land.

Cooper had them dim the inside lights to deter a possible sniping. The plane taxied to a remote end of the runway and one person was instructed to deliver the ransom.

Cooper then had the 36 passengers released, and also had meals brought for the flight crew. The plane was refueled and then took off, with Cooper and the four-person flight team.

Cooper wanted to fly to Mexico City at an altitude of 10,000 feet at a slower-than-normal speed. But the pilot informed him that the plane would be sucking so much fuel at the low altitude that they only had a range of about 1,000 miles. So Cooper had them fly to Reno. When they crossed SW Washington, the crew felt a pressure change and saw a warning light come on. Cooper had dropped the rear-facing stairs at the back of the plane. A few minutes later, they heard a bump as the stairs bounced up against the plane as Cooper leapt from them. The crew flew on to Reno and landed.

Upon landing, the plane was rushed by the FBI, who confirmed that it was short one very significant passenger. Thus began a manhunt which continues today.

The SW Washington area was combed by the authorities, who found no trace of Cooper, his parachutes, or his cash. The area was quite wild and woolly, so searching was difficult. Cooper was smart enough to jump out during a rainstorm, making it impossible for tracking Air Force jets to see his parachute, so the area to be searched was quite large in scope.

Authorities interviewed a man by the name of D.B. Cooper, but quickly determined that he was not their hijacker. However, the name D.B. Cooper was repeated on newscasts and other media so many times that eventually Dan Cooper “became” D.B. Cooper.

Evidence of Cooper was finally found in 1978. A placard showing instructions for deploying the 727’s rear stairs was discovered. It was from Cooper’s plane.

But the real breakthrough discovery was made in 1980. Eight-year-old Brian Ingram found 294 bundled twenty dollar bills in shallow water in the Columbia River. The bills were badly deteriorated. And they had serial numbers which matched those of the ransom.

Did Cooper survive? Nowadays, most doubt it. His backup chute was a dummy, and the design of his main chute was such that only an expert could land without getting injured.

Cooper is popular nowadays. He’s been featured in books, movies, TV shows, and the town of Ariel, Washington has an annual D.B. Cooper festival. Periodic findings of evidence put his name back in the news. For instance, in 2008, a parachute was discovered, but determined to not be his. Plus, his overall congenial treatment of the passengers and flight crew, and the fact that nobody was killed in the hijacking, make him almost admirable.

You gotta give him one thing: he had guts!