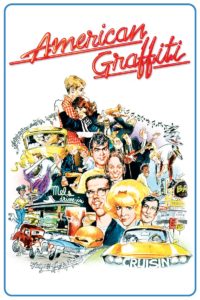 Let’s see, if we were to make a movie about life eleven years ago, it would be all about the exciting year of 1996. Who can forget the great music, the cruising, and the carefree times?

While each generation defines its own “good old days,” the fact is that some pretty profound changes took place in the years between the late 50’s and the early 70’s. These changes involved a tremendous loss of innocence, as things like Vietnam, the Nixon White House, and three tragic assassinations turned us all into cynics. Even Cuba was just a former Mafia playground turned insignificant communist nation early in 1962.

Of course, my first coherent memory was the first of the three killings. So I’ve always been a cynic.

George Lucas noticed the changes that had taken place. He envisioned a movie set eleven years in the past that captured the last days of the Cruising Era. Vietnam was a country nobody had heard of. Nixon was the unshaven buffoon who debated Kennedy so badly. Southern California teenagers dealt with all of the angst associated with the child/adult transformation period the best way they could: by hopping in their cars and jamming to the Wolfman transmitting with the aid of 250,000 watts of Mexican power all across the western United States.

Lucas, a promising filmmaker who, as every true geek knows, commemorated his first film, THX 1138 by making the license plate of John Milner’s 32 Ford hotrod THX 138, thus being historically faithful to California plates of the era, maximum-character-wise, shot the movie in less than a month on a low budget.

But it struck a nerve. American audiences made the film a smash hit, and either launched or catapulted the careers of Ron Howard, Harrison Ford, Suzanne Summers, Cindy Williams, Richard Dreyfuss, Mackenzie Phillips, and Wolfman Jack. And deservedly so, because the fact is that it was quite simply a great film.

Nostalgia swept the nation after its release. That led directly to ABC TV’s launching of Happy Days, which spawned several shows itself. 7Up had a great commercial about that time about a 1950’s teenager. And the movie’s soundtrack woke up (or reminded) the public of just how great the music of the time was.

Even in the 21st century, Cruise Nights put on by various businesses and communities take on the air of cruising down the boulevard in Modesto circa 1962.

Of course, Lucas used his acclaim from the film to gain a foothold as one of the premier producer/directors in Hollywood. And that little Star Wars series did nothing to hurt his reputation.

But as much fun as the galactic battles were, I can’t help but marvel at the amazing gift he gave us back in 1973 with a shoestring budget and a bunch of actors who would work cheap.