Oh Lord? Won’t you buy me a color TV?
Dialing for Dollars is trying to find me!

Janis immortalized a local TV phenomenon with her very last recording, “Mercedes Benz.” Indeed, this writer may have completely forgotten about the home-grown giveaway program if not for that lyric, memorized many years ago.

Dialing for Dollars was a part of Boomer memories, as well as those of subsequent generations. Incarnations of the show ran on local affiliates until the 80’s, and may indeed still exist.

It all started in 1939. WCBM radio in Baltimore began running a money giveaway show hosted by Homer Todd. Dialing for Dollars was a local hit, and as television began coming into the picture throughout the late 40’s, it moved to that medium.

The show was franchised, meaning that a fee was paid to use prebuilt props and the like, as well as the familiar format and the ever-more-popular name. Thus, local stations all over the US had their own versions of Dialing for Dollars.

And Boomers, no matter where they grew up, likely can remember such shows.

The concept of the show was simple and effective. The host would announce a passphrase (example: a count and amount). The show might feature interviews, local talent, stuff like that. At some point or points, a telephone number would be selected at random. The number might have been submitted, or it might have been clipped or copied from a local phone directory. I remember a big wire mesh drum that would be rotated and a door being opened and a number being selected. The call would be placed live, and the recipient of the call would be challenged to provide the passphrase. 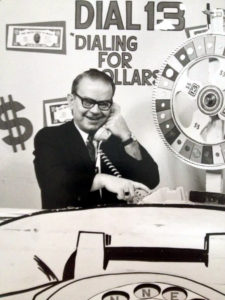 If they were watching and paying attention, they would win! The money rewarded was appropriate for the budget of a local TV station, perhaps a few hundred bucks.

It was very addictive to a nine-year-old kid home on summer vacation watching television during a weekday afternoon.

Another way the show was conducted was to be featured as commercial breaks during a MOM (moldy old movie) that would be shown in an afternoon time slot, perhaps on a Sunday afternoon when there were no network sports shows available.

In researching this piece, I learned that my own local channel that carried Dialing for Dollars was KODE in Joplin, Missouri. I can remember the canned theme song, a strings tune that was probably used for a dozen other local shows all over the country. And I can remember eagerly sitting by the phone just in case it was our number drawn from the big wire mesh drum.

Of course, it never was, but I experienced excitement nonetheless when a viewer would indeed be watching and win a nifty cash prize in exchange for being in the right place at the right time.

Expanding network offerings and the ready availability of syndicated game shows did Dialing for Dollars in. That was also the case with a plethora of other charming local shows that were designed to fill otherwise dead air time, like this, this, and this. The original DfD left the Baltimore area in 1977, after a 38-year run. They gave away some $800,000 during that period, a few hundred bucks at a time.

So, I guess I can quit waiting by my phone now. Looks like Dialing for Dollars has ceased trying to find me.