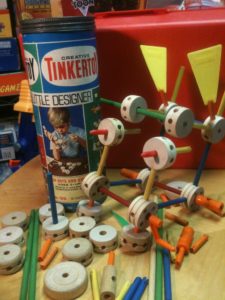 As I recall my childhood, I can remember that there were some toys that were owned by just a few of us. These were generally at the higher end of the price scale. For instance, I was the only one in the neighborhood to be the extremely proud owner of the James Bond Attache Case. My best friend had the only G.I. Joe Space Capsule. But some toys were universal. Take green army men, for instance. Or Hot Wheels cars. And, of course, the subject of today’s article: Tinkertoys!

One of the most familiar and delightful sounds we were all familiar with was the sound of those Tinkertoys hitting the metallic bottom of that cylindrical cardboard container when we were finished building whatever construction projects were slated for that after-school session with our friends. It’s a sound I haven’t actually heard since childhood, yet it’s still fresh in my memory banks.

Tinkertoys, like Lincoln Logs, was a Baby Boomer plaything that was actually created long before our births. Tinkertoys, according to the Great Idea Finder,

“were the invention of Charles Pajeau, a stonemason from Evanston, Illinois who established The Toy Tinkers company. Inspired by watching children play with pencils, sticks and empty spools of thread, Pajeau developed several basic wooden parts which children could assemble in a variety of three dimensional abstract ways. He designed his first set in his garage, and with high hopes, displayed the toy at the 1914 American Toy Fair. But nobody was interested. He tried his marketing skills again at Christmas time. He hired several midgets, dressed them in elf costumes, and had them play with “Tinker Toys” in a display window at a Chicago department store. This publicity stunt made all the difference in the world. A year later, over a million sets had been sold.”

They have obviously delighted untold generations of children since their introduction. Yet, if your parents were children of the Depression, they probably never had them. However, they made sure WE did!

Tinkertoys were often passed down from generation to generation. They wore very well. The first thing to go would be the plastic fan blades. The next thing to break would be the split ends of the long sticks. The round pieces would last forever.

I remember playing with a hand-me-down set when very young, then being presented with a set just like the illustrated one during a holiday. It was with that new set that I discovered something new car buyers also appreciate: the wonderful aroma of the brand new product. It was a delicious smell of wood, paint, and just all-around newness.

You could freelance your own creations, or you could build the illustrated ones in the manual that came with the set. Most of the kids I knew still had those manuals with their sets, it was easy to tuck into the can when you were finished. Of course, it would also age rapidly, soon developing tears and such.

The ultimate Tinkertoy creation was the Ferris wheel, and I constructed dozens of them. It would turn, just like a real one, and would even give rides to those aforementioned green army men.

I have no idea how many architects were inspired to pursue their careers by Tinkertoy sets, but I’ll bet it’s a significant number. As the sets are still being produced, that’s a number that is no doubt increasing daily.

I went a different direction myself, careerwise, but still have fond memories of constructing bridges, vehicles, and, of course, Ferris wheels long ago.