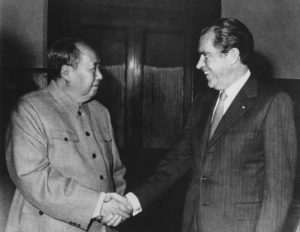 We Boomer kids grew up in a pretty consistent political situation: Better Dead than Red.

The communists, ANY communists, were our sworn enemies, that is if you lived in the United States, or most other democratic nations. Russia, Cuba, East Germany, North Vietnam, Red China, they were all the same. The bad guys. The other side. The force from which the world must be protected from further expansion.

That all began to take a turn another direction entirely in 1971.

Table tennis, or ping-pong, was occasionally featured on ABC’s Wide World of Sports. While it had its followers, it was far from being one of the more popular competitive contests in the US. But it was a different matter in the Orient. Ping-pong was a passion!

Despite its lack of serious fan base, the US had a pretty good ping-pong team in 1971. They were playing in a tournament in Japan that year when a chance incident of a player jumping on the wrong bus, coupled with a courageous act of generosity by one of his competitors, led to relations normalizing between China (notice we dropped the Red?) and the United States.

US star player Glenn Cowan was late practicing one evening, and missed his bus back to the hotel. He spotted another bus and jumped on. It was occupied by the Chinese National Table Tennis Team.

Cowan was an outgoing fellow, and stood at the front of the bus as it left for the hotel and said a few informal words to the team. A translator passed them on in Chinese. The result were icy stares from the players who had been well-schooled in the decadence of the West, and the need to avoid contact with them at all costs.

Then, a player named Zhuang Zedong stood up in the rear of the bus, walked forward, and presented Cowan with a silk-screen portrait of the Huangshan Mountains.

Cowan was flabbergasted (in a good way) by the act of generosity. The rest of Zedong’s team were equally flabbergasted, but in a distinctly different direction.

When the bus arrived, there were photographers present who recorded the bizarre sight of an American competitor getting off of a bus full of communist Chinese rivals. 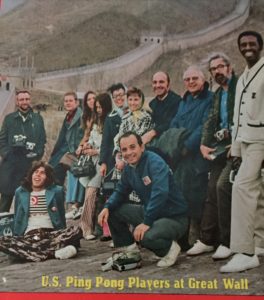 The incident received lots of airplay, and it eventually got back to Chairman Mao. With the Cultural Revolution (and the rumors of its horrible human rights abuses) winding down, he decided that it was time to make a friendly gesture towards the largest of the western nations. The end result: the US team was invited to visit China to play in a tournament just a few days after the Japanese competition was over.

The tournament was a success, even though the Chinese team seemed to be taking some dives in the name of diplomacy. A little less than a year later, Richard Nixon made his historic trip to visit Mao and Chou-En-lai (as he was known then). He also toured many parts of the country, and the TV shots of him standing on the Great Wall are burned indelibly into my memory.

Soon, we were doing business with China, and suddenly seemingly forgot that there existed a small island off of the nation’s east coast that we had once also called (nationalist) China. Such was the price paid for new political allies.

I was a serious juvenile philatelist in those days, and was delighted to learn that I could now obtain stamps from Communist China. I ended up with quite a few for a quarter or so from the Littleton Stamp and Coin Company.

Today, for better or worse, there are few items in the discount stores that are manufactured anywhere but China. Chinese-made merchandise has suffered a poor reputation for quality that is slowly being overcome. My son recently presented me with a very nice Kershaw pocket knife that was made over there.

But once upon a time, Red China filled a kid’s heart with uneasiness, imagining a vast communist army that was bent on destroying the American Way. After all, ALL communists were evil!