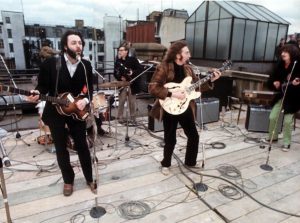 The 1967 death of Brian Epstein was the beginning of the end of the incredible pooled talent of what we knew as The Beatles. Epstein was a manager that the group respected, whose decisions weren’t always perfect, but weren’t disastrous either. On August 27 of that year, the day before I turned eight years old, Epstein died of an overdose of sleeping pills.

The Beatles muddled on under McCartney’s taking the lead for awhile, but Paul’s decision to commit the group to the film Magical Mystery Tour effectively ended the rest of the boys listening to him. While the accompanying album was a success, the film was a critical and financial flop.

By 1968, and the recording of the White Album, all four members of the band were thinking much more in terms of themselves as individuals rather than as members of the greatest pop/rock band in history. 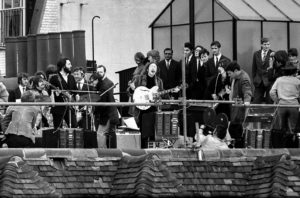 The post-Epstein group was persuaded to film a live concert, along with the practice sessions leading up to it, tentatively called Get Back. As it turned out, the film’s eventual completed version, released as Let It Be, captured the worst of the squabbling that was taking place among the members to the disintegrating group.

But there certainly was a glorious high point of the documentation: the Rooftop Concert of January 30, 1969.

The group met with the film’s production department four days earlier. They presented the idea of setting equipment up in the cold January air on the rooftop of Apple’s headquarters in Savile Row near Piccadilly Circus.

The idea was crazy on a number of levels. So of course it was agreed to and planning began.

On the busy Thursday workday, the group arrived at the rooftop, grabbed instruments, and began jamming. Cameras were rolling all over the place, including down in the streets as astonished Londoners engaged in their normal workday routines came out to see what all of the loud music was all about.

What none of them realized at the time was that it was history. It was the final live performance of The Beatles.

The bobbies hadn’t been informed, nor had anyone else but the filming crews. So it wasn’t long before the police showed up, looking curiously upward and trying to maintain order as the streets began to fill with both fans and detractors of the group.

Eventually, the police showed up at the rooftop itself and demanded that the impromptu concert cease. Legend has it that it might have gone on much longer, if not for the wool merchant next door. He was quoted as saying “I want this bloody noise stopped. It’s an absolute disgrace!”

Footage exists of the magical moment, of course. The concert, as well as many other Get Back recordings, were among the most bootlegged moments of rock and roll history. Underground record stores like many medium-to-large-sized towns had in the 70’s had the uncut products for sale freely.

George Martin eventually produced the album Let It Be, for better of worse, complete with heavenly choirs to help dissuade the depressing sound of the constant bickering.