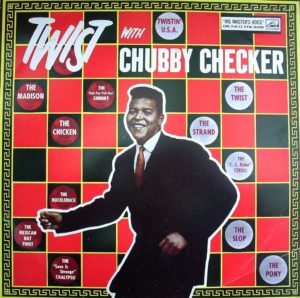 This one is one that I personally don’t remember at its inception, but have recollections of its fallout. My older brothers no doubt recall when the Twist swept the nation. One reason I’m writing about it is the fact that Chubby Checker’s song “The Twist” set a mark that has never been equalled before or since. More on that in a bit.

I learned some remarkable facts about the dance craze that swept the nation in 1960. In 1958, a group called Hank Ballard and the Midnighters performed a dance routine that they dreamed up at a show they were giving in an Atlanta club. The audience got a kick out of it. Hank wrote a ditty to go along with it and on November 11 of that year, released it as a backside to a single called “Teardrops on Your Letter,” which made the R&B Top Ten the next spring.

The flip side finally got some attention from deejays, and none other than Dick Clark heard it and knew it was a hit.

He invited Hank Ballard and the Midnighters to perform on Bandstand, and for some strange reason, they no-showed. BIG mistake.

Dick suggested someone else might record the song, recommending Danny and the Juniors. Long story short, Chubby Checker was finally chosen to cut the record after disappointing results from Dick’s preferred group.

The record was far from an instant smash. Underpromoted by Cameo-Parkway Records, it took fourteen months from its release to catch on. Checker, knowing it was great, worked his tail off doing his own promotion in the form of interviews, TV dates, and live shows. He reportedly lost thirty pounds demonstrating the Twist.

Finally, in 1960, lightning struck. The Twist went to #1. Then, in late 1961, it RE-ENTERED the charts and soared to #1 again! No other song has ever accomplished the same feat.

Many other songs were released that referred to the Twist, and it was still around in the mid-1960’s. It still makes periodic comebacks, always danced to Chubby’s familiar tune.

I got a lot of this history from http://www.classicbands.com/checker.html. For much more detail than my brief overview, visit their site.