The things we Baby Boomers were destined to accomplish! We would be the generation that would usher in cheap, clean nuclear power! We would be driving flying cars by 2000! And we would take the lead in adopting the efficient, easy-to-use metric system!

OK, enough with the exclamation points already. Obviously, all three of these particular dreams were overblown.

However, it may surprise you to know just how close we are to being a metric nation. Read on.

It all started by those lovable masters of illogic, the French, who decided we needed a logical system of measurement. According to metric scholar Pat Naughin:

OK, raise your hand if you knew that our founding fathers were part of the team behind the metric system. THIS history buff didn’t!

During the 60’s, Great Britain, Australia, and Canada all began a systematic conversion to the same system that most other countries had officially adopted: the metric system. This left the US, Liberia and Burma still using the English Imperial units. Thus, talk began spreading among legislators,educators, and manufacturers about switching over.

There was really no choice in the matter. Go metric, or lose every economic and intellectual advantage you have over the rest of the world.

Thus, the metric system began being taught to us Boomer kids in schools.

At this point, it would be good to point out that pharmaceutical manufacturers had been using the metric system since early in the 20th century. So had much of the tooling industry. When it came to teeny tiny amounts, it just made more sense to them to use grams and millimeters.

But it was in the 70’s that many others followed suit. For example, food manufacturers. Cereal boxes began being sold in metric weights, with the standard weight in parentheses. The implication was that the METRIC system was the preferred one.

The liquor industry was an eager adopter. I know that by the time I could legally purchase hootch in 1980, the half-gallon, fifth, and pint were gone, replaced by their metric equivalents. Wine was sold in metric quantities as well. Interestingly, the working man’s preferred libation, beer, stubbornly resisted change. 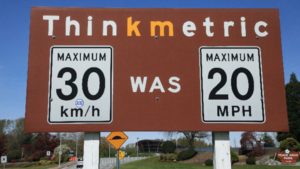 Indeed, it was stubborn resistance by the working stiffs among us (including, for the longest time, ME) that kept the US from jumping in headlong with the rest of the world and becoming an official metric nation. We cringed at the sight of kilometers on our speed limit signs. We rolled our eyes at temperatures given in Celsius. We were disgusted when our SAE wrenches that we might have inherited from our fathers and grandfathers no longer fit these newfangled nuts and bolts on our cars.

A flyer published in Singapore in the 70’s, shows an approach that might have made the transition easier. Children, teach your parents the metric system!

But instead, we tended as a generation to agree that our feet, pounds, miles, and gallons were just fine, thank you.

However, the metric system continued to be adopted despite our indifference and/or opposition. Our American-made cars began to sport speedometers that read in both MPH and KPH. Some gas stations extended the functionality of their old two-digit-price-limited pumps during the Arab oil embargo of 1973 by marketing the now-expensive stuff as liters. The Olympics turned us into begrudging experts into what constituted a meter, a kilogram, or a kilometer. Domestic cars even began to be manufactured with metric bolts.

That brings us to today. The US continues to be one of three blips on the world map that are still officially non-metric. But in reality, we are as much, or even more so, metric than some official countries. It just doesn’t say so on our company letterhead.