We traveled a lot when I was a kid. We took all-day trips to Iowa and central Texas from northeast Oklahoma every year to visit my two sets of grandparents. Those trips didn’t involve motel stays, but we stayed in a myriad of them on other, less time-intensive treks.

My dad was old-school Norwegian stock from Minnesota. That meant dollars didn’t fly out of his wallet. He looked for the best value for the buck. And, quite often, that meant staying in a clean motel with no place for a kid to swim.

But, not too rarely, he would splurge an extra five bucks a night and give me the ultimate thrill: staying in a motel that HAD A POOL!

I have been able to relate very closely to my father’s quandaries as I have reached middle age. For instance, the idea of getting a good cheap motel that looked squeaky clean as opposed to a more expensive chain franchise that came complete with a pool for the kids was always very tempting. But then I would remember the unbridled joy that I would exude when dad would pull into a motel parking lot that had within its expanse a gorgeous, blue, sparkling-in-the-sunlight swimming pool. 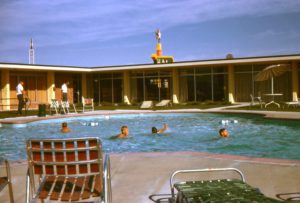 Another way I can relate to dad is in not giving a whit whether a motel has a pool or not. Out of the last 100 hotel/motels I’ve stayed in that had pools (in other words, that had been built since 1980), I actually swam in perhaps five of them. I was too tired from traveling to consider suiting up and jumping in.

But kids who have been sleeping in the back seat all day long are another matter. And when my kids were small, that meant dragging my tired bones down to the pool to watch them.

That’s okay. It was easy work.

In my childhood, I became quite adept at turning flips and such from motel diving boards. I was a natural swimmer, so the eight-foot-depths were no sweat to me.

Nowadays, of course, we live in litigious times that insist that pools be idiot-proof. That means the shallow concrete reservoirs are suitable for little else but floating around upon on an air mattress.

But we Boomer kids can remember when our fathers’ pulling into a motel parking lot that also housed a pool meant that we were in for an unbridled afternoon full of joy jumping off a board and eventually getting ourselves as tired as our traveled-out parents.